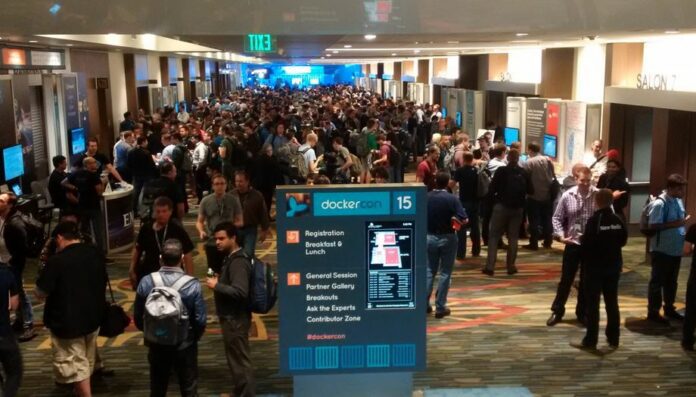 SAN FRANCISCO — Remember the line in the 1975 Steven Spielberg movie “Jaws,” in which Roy Scheider’s character Brody is asked how big the shark is they were tracking? “You’re gonna need a bigger boat,” Brody famously says.

Well, Docker is going to need a bigger boat to house all of its conference attendees in the future. This week’s DockerCon 2015 event at the San Francisco Marriott Marquis was oversold at about 2,000 and packed to capacity, with just about every session and keynote loaded with developers hungering for more information about how to use containers in their IT systems.

Personally, I have been to innumerable conferences, and the only ones with hallways and rooms hotter and more crowded were probably at CES in Las Vegas and CeBIT in Hannover, Germany — two of the longest-running and most populated IT conferences on Earth. The word June 23 was that the Docker conference will be held at the Seattle Convention Center in 2016.

DockerCon has only been staged for only a couple of years, and its container IT has intrigued an awful lot of developers.

Why? “It mostly because of the portability factor,” a developer from Ft. Collins, Colo. told eWEEK. “There’s just so much more you can do, and quickly, when working on something. You can move workloads, apps — basically anything — quickly from one place, or to multiple places, and the connectivity just works.”

For the record, Docker is the lead commercial sponsor behind the popular open-source Docker application container virtualization IT that competes directly with the virtual machines championed by VMware for the last 15 years.

Security is one soft spot in the Docker world; the containers have no dedicated security scheme that comes with them. Users have to rely on their current security apps until Docker adds one of its own.

But that, surprisingly, isn’t uppermost on Docker users’ minds. They just want to create and iterate fast, because that’s where the market is going. Fast, faster, fastest to market means success in terms of company goals, job satisfaction and, certainly, in dollars.

At DockerCon 2015, in that crowded hallway in which those trying to move from one point to another had to slowly, carefully pick their way through intense huddles of guys in deep conversation, dozens of new and relatively new companies were on display, explaining their connection to Docker and the container trend.

Go here to see the DockerCon site and get a list of the companies and individual participants in the conference. DockerCon had its own app that reported in real time how many people had registered for each session and who exactly showed up, too.

There appears to be an entirely new sector being carved out here, centered around new virtualization methods, and it’s way past the hype stage.

This conversation is to be continued.