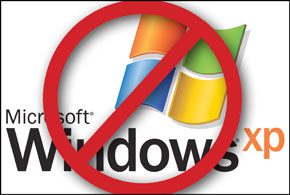 Today, for the first time, Windows XP users are in uncharted territory. As the company has repeatedly warned during the past year, it has officially ended support for the 12-year-old operating system.

“Windows XP support has ended,” reads an attention-grabbing headline on a Microsoft Website devoted to Windows XP’s support deadline. “As of April 8, 2014, support and updates for Windows XP are no longer available. Don’t let your PC go unprotected,” urges the company.

Incidentally, as one Windows era ends, another begins. The company is using the date to officially launch its highly anticipated keyboard- and mouse-centric Windows 8.1 Spring Update.

Going forward, Microsoft will no longer issue security patches and bug fixes for the long-lived XP operating system. Although firewalls and anti-malware software may fend off today’s threats and buy users some time until they migrate, the company expects a flood of malware that will target Windows XP, which currently clings to roughly 27 percent of the desktop OS market, according to Net Applications, an Internet analytics firm.

Consumers aren’t the only ones at risk. A significant number of businesses are still running XP, according to network security and vulnerability scanning specialist Qualys.

In data compiled from QualysGuard scans of 6,700 companies, the company discovered that Windows XP remains popular in the financial industry. “Use of XP is at 21 percent of scans, levels that are too high, especially for an industry dealing with such sensitive data,” said Qualys Wolfgang Kandek in his analysis of the data. XP also lingers in the transport (14 percent of scans), retail (14 percent), services (7 percent) and health care (3 percent) industries.

Kandek urges IT managers to limit their company’s exposure to Windows XP. “Upgrade your software or decommission it,” he advised. “While some uses of XP can’t simply be upgraded, examine if it is a critical component to your system. Isolate XP as much as possible, and limit dangerous activity on these devices (including surfing the web and using email).”

Sumir Karayi, CEO of 1E, an IT software and services firm, warned about the cost of sticking with Windows XP past its expiration date. “Many businesses that are attempting to shore up their defenses, instead of migrating away from Windows XP, are installing security and support measures that are eye-wateringly expensive,” he said in an email to eWEEK.

“For those companies that are taking out bespoke Windows XP support from Microsoft are facing costs of $200 per PC this year, with that figure more than doubling for every year after,” estimated Karayi. And those amounts add up quickly for businesses with big XP deployments. “This means that from April 2014, a company with 5000 computers still on Windows XP would be looking at a bill from Microsoft of $1 million for support alone.”

Security and cost concerns aside, keeping the past-its-prime OS around can have other harmful effects. “As Windows XP becomes obsolete, few applications now support the Operating System, and companies are jeopardizing their productivity and ultimately profitability,” said Karayi.