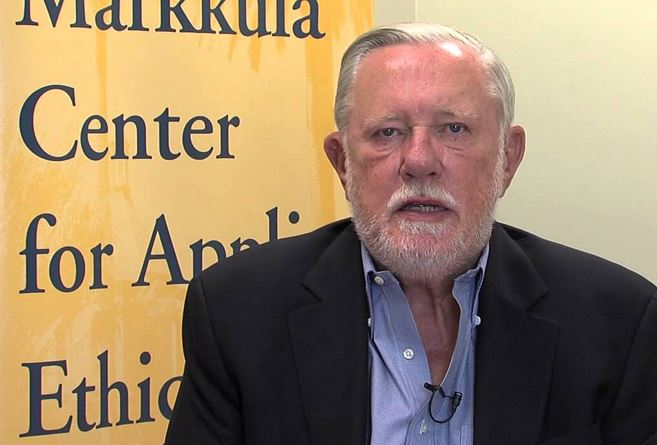 Dr. Chuck Geschke is being honored with a lifetime achievement award at the annual gala March 16 of the Commonwealth Club of California, and few IT thought leaders deserve an accolade of that magnitude more than he.

You’re forgiven if the name doesn’t immediately ring a bell. However, if you’ve ever used Creative Cloud, Photoshop, Illustrator, PostScript or anything from Adobe Systems in your lifetime, Geschke had something to do with bringing it to you.

He co-founded Adobe, along with the more well-known John Warnock, way back during the Reagan Administration (1982). As CEOs tend to do, Warnock early on became the de facto front man for the highly successful graphics and publishing software company; Geschke was quite comfortable with his founding partner serving as the company’s public talking head.

Geschke, 76, will be honored for his pioneering work to develop the first digital printing script, revolutionizing the publishing industry and graphic design, and for stewarding a highly successful company for more than 40 years. He will receive the club’s William K. Bowes, Jr. Lifetime Achievement Award at a sold-out dinner event at the Fairmont Hotel in San Francisco.

It All Started at PARC Labs

Prior to co-founding Adobe, Geschke and Warnock worked at Xerox’s Palo Alto Research Center (PARC). Geschke had started there in 1972 to launch a new laboratory within the center “focused on graphics, printing and a little bit of optics,” he told eWEEK.

Geschke eventually formed and headed PARC’s Imaging Sciences Laboratory in 1978 where he directed research activities in the fields of computer science, graphics, image processing, and optics. While there he hired his long-term research partner, Warnock, and together they invented a page description language (PDL), which provided a means to describe complex forms such as typefaces electronically; they called it InterPress.

However, the two scientists were unable to convince Xerox management of the commercial value of Warnock’s InterPress graphics language for controlling printing, so they made the life-changing decision to leave Xerox and start up Adobe Systems.

Their newfound creative freedom enabled Geschke and Warnock to evolve their Interpress language into Adobe’s PostScript, which when combined with hardware from Apple, formed the first desktop publishing system where anyone could set type, compose documents, and print them as they appeared on the screen electronically.

Xerox, no doubt, looked back on that development with a smidge of regret.

Lots of Innovation in Those Days

“Those years at PARC were really exciting for us,” Geschke said. “I had Bob Metcalfe in the office next to mine, inventing Ethernet; we were showing the Alto personal computer, five years before the IBM PC; we had built the first laser printers, color and black and white. In my office, I had software that looked remarkably like Microsoft Word, because the young guy who worked with us and did it, Charles Simonyi, eventually went to work at Microsoft and built Office for them.”

Simonyi, now a billionaire, is now involved in the Space Adventures Tourist program.

Innovation was everywhere in Silicon Valley in the late 1970s and ’80s.

PostScript was marketable to enterprises because it was machine-independent and extremely flexible. It mirrored the rise of the personal computer, the market for which was led by IBM, Apple, Commodore and a few other vendors. In fact, people were actively looking for new apps for PCs. With their new approach, Geschke and Warnock brought their product to the market, allowing business users to greatly improve the quality and efficiency of the document production process.

Thus, Geschke and Warnock were the key pioneers for an entire industry: desktop publishing.

Geschke, a resident of Los Altos, Calif., has been at his own company for 34 years–most of his professional life. From 1986 to 1994, he served as Adobe’s Chief Operating Officer, and from 1989 to 2000 he was the company’s president. He retired as president of Adobe in 2000, shortly before Warnock left as CEO.

Geschke has served as co-chairman of the board since 1997.

Geschke had a hair-raising experience one day while at work at the Adobe offices in Mountain View, Calif. On the morning of May 26, 1992, he was kidnapped at gunpoint from the parking lot by two men as he arrived for work. He was held for four days before being recovered from a house in Hollister, Calif. by the FBI. On May 31, Geschke was freed when a suspect caught with $650,000 in ransom money led authorities to a bungalow hideout, according to the FBI.

The two kidnappers were eventually caught, tried and sentenced to life terms in state prison.

As Geschke has made adjustments in his life in IT, Adobe itself has evolved right along with the times during its long tenure in business. Adobe Photoshop became a mainstay application in the client-server, desktop PC era of the 1980s and ’90s, and its cloud-service successor, Creative Cloud, has long been the market leader in graphics editing-as-a-service.

He’ll certainly be receiving a load of accolades at the Commonwealth Club event–all well-deserved.