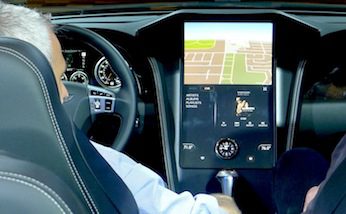 The automotive industry is the next natural extension of the smartphone market. Automakers will soon have their own app stores, mobile developers are designing apps with drivers and passengers in mind, and as smartphone sales begin to slow, market segments from the wireless carriers to the mobile chip makers have a new revenue driver to focus on.

Juniper Research expects 20 percent of cars, or roughly 90 million, in North America and Western Europe to be app-connected by 2017, driven by smartphone ownership and changing expectations.

At the 2013 BlackBerry Live event from May 14 to 16, BlackBerry showed off its newest concept car, a QNX Bentley Continental GT. While QNX is in the infotainment systems of the great majority of new cars on the road (it’s in 200-plus vehicle models), the Bentley was designed to interact with BlackBerry 10 devices.

The car features a 17-inch, 1080p display that’s curved, so a user’s finger can comfortably reach every inch of it, and includes pre-touch technology, so it can sense even a hovering finger.

From the (parked) car, a user can place a video call to a smartphone and, among other things, the car—which can be an end point in the BB10 Hub—can reach out to the driver with diagnostic information, such as to say that the oil is low.

The phone, in turn, can contact the car, to push updates to its software—this was demonstrated onstage, and occurred very quickly—or, over morning coffee in the kitchen, to push out route information for a trip later in the day.

BlackBerry can also use the software to push out its own updates and manage cars on a global scale.

While the Bentley is a concept car, not available to the public, Mercedes-Benz CEO Johann Jungwirth joined BlackBerry CEO Thorsten Heins onstage during his May 14 keynote address, to suggest that many of the same capabilities are coming to future cars, which increasingly resemble our other devices.

“I think we are the only OEM using a secure VPN link between the car and our back end,” said Jungwirth, who added that all Mercedes vehicles are now connected.

When asked by Heins what his vision for five, 10 or 20 years down the road was, Jungwirth was coy.

BlackBerry QNX Bentley Offers a Glimpse at the Road Ahead

“We cannot disclose everything, but I can say that cars will be much more connected, much more intelligent … and the cloud will play a bigger role. We have also just launched Intelligent Drive,” he added, referring to the sensor-based system that can do everything from issuing visual, acoustic and tactile warnings to the driver to taking control of the car in an emergency situation.

During a breakout session for developers May 16, Andrew Poliak, QNX’s director of automotive business development, offered advice and a general idea of how the market is moving.

OEMs are already awarding business for 2016 though 2018, he said, which presents a challenge for a mobile market that watches technologies evolve from top-shelf to timed-out in 12 months’ time.

Developers should think green—anything that can help drivers or the car makers improve fuel economy has an excellent chance of succeeding. They should also make sure their apps are bulletproof—bugs are costly and won’t be tolerated—and that they’re as minimally distracting as possible. California recently expanded its ban on texting and driving to include checking smartphone maps while driving, and it likely won’t be alone.

Developers should also consider the types of apps that will still have appeal and relevance in 10 years, said Poliak. He gave the example of an app that shows a full glass of water. Break or accelerate too quickly and the water sloshes out. Keep the water in the cup, and you’re driving well—and improving your miles per gallon.

Another growing area is “bring your own display”—a trend that relies on the user’s phone as a way to “drive down costs but offer a rich user experience for low-end vehicles,” said Poliak.

The vehicle head units of tomorrow will be much like those of today, but with car-relevant social networking—not just the ability to find a restaurant, but a restaurant the driver’s friends like—augmented reality and extended connectivity.

BMW, Poliak added, may be the first to put pico projectors in dashboards to project maps across the windshield for easier navigation.

As Mercedes’ Jungwirth told the audience at the keynote, “It’s incredible the opportunities we have. … It’s a very bright future ahead.”