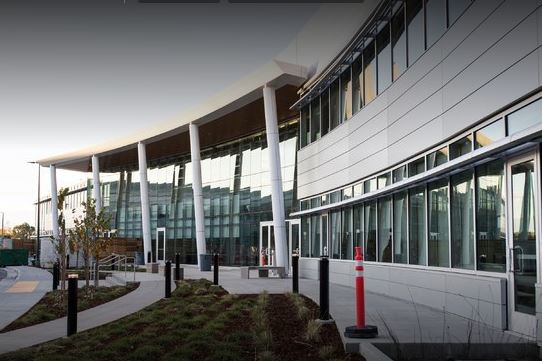 A few weeks ago, 550 high school students started attending daily classes at Oracle—actually on the company’s headquarters campus—in a new charter-school program that began as a special project more than four years ago.

The whole process that created d.tech (lower case is correct) High School (for Design Tech) High School in the Redwood City, Calif. neighborhood of Redwood Shores (pictured) is now under consideration for being replicated to more locations around the country. But for now, the celebration is continuing for the opening of such an unusual IT-focused public school.

Tech companies all around the world have been concerned for years about making STEM (science, technology, engineering, mathematics) more palatable for junior high school and high school students. While there are a number of national programs and initiatives hard at work on this, Oracle and its education foundation have now done something very brick-and-mortar about it.

The huge database and cloud services provider announced in October 2015 that it would build the 64,000-square-foot, state-of-the-art, LEED-certified (Leadership in Energy and Environmental Design, a certification by the U.S. Green Building Council) school to be used by 550 students and 20 faculty members (40 staff in total), as well as the local community.

“Seventeen years ago, Larry Ellison told me that he’d love to have a school where students learn to think,” Oracle CEO Safra Catz said at the time of the announcement.

“Our support of d.tech reflects Larry’s vision for a unique high school founded on principles we believe in: innovation, creativity, problem-solving and design-thinking. We couldn’t be more excited to build this school on our campus and to see the positive impact it will undoubtedly have on the students, teachers, Oracle employees and the Bay Area community.”

Started as a Local Public Charter School in 2014

Design Tech first launched in August 2014 as a California public charter high school in a small corner of Mills High School in the San Mateo Union High School District. Oracle recognized the potential of the high school’s unique academic model and, through a partnership with the school, provided the land and built the gleaming new facility.

“d.tech is the world’s first educational institution located on a high-tech campus that gives students immeasurable opportunities,” Dr. Ken Montgomery, Design Tech’s executive director and founder, said. “We are incredibly grateful to Oracle for giving d.tech a home—a place to inspire and nurture students who will transform our community and world for the better.”

In addition to their basic education classes, students at d.tech are writing code, designing application architectures, putting together hardware components for PCs, and a list of other high-tech specialties.

“The students are working hands-on with various kinds of open hardware ‘naked’ devices—Arduinos, Raspberry Pi, and so on,” Oracle Education Foundation Executive Director Colleen Cassity told eWEEK. “We also use a lot of technologies like microcontrollers, microprocessors, and so on, that are used in everyday IT processes.

‘We Are Design Thinkers’

“My entire global team are design thinkers in the Oracle Education Foundation, and really, in the entire Oracle corporate citizenship organization. That’s what really brought us together (with the school district); it is the shared values and relationships in common around design thinking. That’s how we rather serendipitously met each other and got this program started in 2014.”

The school also offers something called Intersession, in which special programs on writing, dance, art, social service and other topics are introduced four times a year into the curriculum for two-week periods. It’s all in the interest of educational balance.

For example, a representative from the NBA’s Golden State Warriors dance squad is set to visit the school to offer dance lessons, and an outside professional will be talking to the students about use cases for virtual-reality applications.

Could building such an educational center become a trend in the IT world? Will other companies follow suit? This becomes a distinct possibility. Plans already are being formulated to replicate this in other areas around the U.S., Cassity said. Oracle is doing research now to find out optimal locations for additional schools like this one.

Another added long-term benefit of such a school is the prospect of it becoming a “farm team” for future Oracle employees—which could very well become a reality.

For decades, IT companies have decried the lack of high numbers of highly qualified students of science and math to fill large numbers of tech jobs in the United States. Thus, recruitment of employees from countries such as Taiwan, India, China, Japan and Eastern European nations has been on the rise to fill the gaps.

Oracle’s longtime commitment to education includes donating $2.5 billion annually in software, curriculum and faculty training to educational institutions through Oracle Academy. The company also donates millions in cash annually to nonprofit and nongovernmental organizations around the world through Oracle Giving.

Go here to view a short YouTube video on the ribbon-cutting on Day 1 of the school.