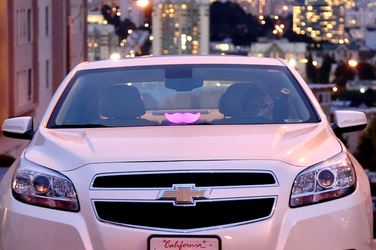 At first glance, the announcement by Luc Vincent, the VP of engineering at Lyft, that the ride-hailing company was opening a new self-driving division looked like a late me-too effort to respond to Uber’s work on self-driving cars.

But looking a little deeper into the effort, it’s clear that Lyft’s plans and the company’s motivations are far different. For Uber, the self-driving effort seems to be designed to cut drivers out of the equation and to make more money for Uber.

Lyft, by contrast, actually envisions a future for more drivers, at least in the short term, as more and more people stop driving themselves and start using services like theirs. In addition, Lyft has announced that it’s not just making its self-driving plans but rather is creating an open network that Lyft or anyone else can use. The company has even published an API to allow anyone to connect to its open self-driving platform.

There are other differences, obviously. Lyft operates as a responsible member of the community, the company worries about paying its drivers enough, and for the longer term, the company is developing what it calls a hybrid network that’s designed to embrace both human and autonomous driving.

To this end, Lyft is opening the Level 5 Engineering Center in Palo Alto, Calif., which is devoted to the development of self-driving vehicles. Lyft is already starting to leverage the data it has from its cars with human drivers. That data includes traffic patterns, demand hotspots and driver utilization. The company plans to equip Lyft vehicles with new sensors that can help in the creation of high-resolution 3D maps.

Lyft plans to share its data with its development partners, including companies such as General Motors.

“Lyft is also uniquely positioned to build technology in collaboration with partners in a way that makes it possible to roll out self-driving cars at scale in the fastest, safest, most efficient way,” Vincent said in his announcement.

Unlike Uber, Lyft also looks at the future of autonomous driving over the long term, predicting a time when most vehicles are self-driving, and when they’ll have a powerful impact on society years in the future.

Vincent quoted studies that show dramatic improvements in safety and in accident reduction and in having fewer vehicles on the road. “Having fewer cars on the road will also dramatically reduce pollution and greenhouse gas emissions,” Vincent wrote in his announcement.

Vincent said that Lyft is looking forward to a future where shared self-driving vehicles make transportation cheaper and more efficient for everyone. “It’s a future where there are fewer cars on the road and less traffic,” Vincent wrote. “A future where we can devote less of our space to roads, concrete, and parking lots — and more to parks, playgrounds, homes and local businesses. It is a future where cars no longer contribute meaningfully to greenhouse gas emissions, and with less pollution to cloud our blue skies.”

Vincent said that he’s looking forward to a future where the world is built around communities and people, and not around cars. Of course, Lyft is still a business, and because of that, the company wants to be central to that future. In fact, Vincent noted that self-driving cars aren’t a sideline at Lyft, but rather are core to the company’s business.

There are other reasons that Lyft’s self-driving car effort stands to have a much better chance of success than the effort at Uber. One primary reason is that Uber’s effort has stalled after suffering a significant setback with Alphabet’s Waymo autonomous vehicle division which sued Uber for patent infringement and theft of trade secrets. Uber had to stop using the inventions that had been stolen, and its self-driving cars got put on the back burner.

By contrast, Lyft is partnering with Waymo, its autonomous vehicle development is on solid ground, and the company has the resources to move its plans forward. In addition, the Lyft plan is designed for sharing with partners, and the company is providing invaluable data to the mix—something that every company involved with the self-driving car effort can use. Lyft is also partnering with Nutonomy, a company that creates software for autonomous vehicles, and with Jaguar Land Rover.

Waymo, as part of Google’s self-driving car effort, has more than seven years of experience in the area, giving Lyft a level of experience not available to Uber or other ride-hailing companies. Uber is understandably concerned and has demanded that Lyft share the details of its arrangement to support a claim that Lyft is really just trying to delay Uber.

Unfortunately for Uber, the courts haven’t agreed and have issued a protective order to prevent Uber from getting any of Lyft’s trade secrets. For Uber, all of the activity at Lyft is a big threat, but in reality it’s mostly Uber’s doing because of its business practices and its failure to adhere to even basic standards of conduct.

For Lyft, the rewards for taking the high road are apparently coming to fruition. The company is poised to make a big contribution to autonomous vehicles, and to the society that depends on them.