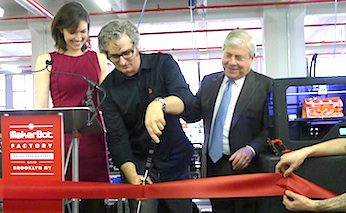 MakerBot, the Brooklyn-based (and Brooklyn-proud) creator of desktop 3D printers, cut the red ribbon on its new 55,000-square-foot facility in the waterfront-abutting neighborhood of Sunset Park on June 7.

It’s a new factory inside an old factory. Or, as founder Bre Pettis said, before cutting the ribbon with a giant pair of MakerBot-made scissors, “It’s a factory that makes small factories.”

The wide-open layout has two walls of classic factory windows, a freshly painted gray cement floor sending a scent of newness into the air, sneakers squeaking over the light thrum of active printers, and a young, T-shirt-wearing workforce that makes the whole place seem like a well-funded high-school science fair.

“We’re really at the beginning of the next industrial revolution,” said a delighted Pettis.

“Every box that we ship out of here is a bundle of potential energy that has the potential to … push the world in a direction where it’s more creative, people are more empowered and the world is better,” said Pettis. “It used to be that when you had an idea, you had to have access to a tycoon.”

Today, a person with an idea, and less than $3,000, can execute on a vision, share it and perfect it. Prototypes that typically took months to make can now be created in a few hours.

“That just changes the game,” said Pettis. “This is a digital manufacturing education in a box.”

“The world’s changing, and [MakerBot] represents where the world is going,” said Markowitz. “The future is right here.”

Pettis and his staff wouldn’t comment on rumors that MakerBot may soon be acquired—”I can’t comment on speculation,” said Pettis—or on how many printers it’s shipping a day.

Diana Pincus, a senior manufacturing process engineer, offered, “What we can say is, we cannot keep up with demand.”

The Future of 3D Printing

“We see 3D printing as a tool for empowerment, already enabling life-changing parts and products to be built in struggling countries [and] helping rebuild crisis-hit areas,” Basiliere said in a March statement introducing a new report on how the technology is disrupting business and creating new opportunities.

MakerBot Has a New Brooklyn Home, Ahead of 3D Scanner Release

The technology is finding audiences in architecture, engineering, geospatial and medical fields—there’s talk of using 3D printers on asteroids and the moon to create parts for spacecraft, Basiliere pointed out.

But, of course, the real benefit of a machine that costs less than $3,000 and is roughly the size of a large microwave is that it’s not only available to geophysicists in private labs.

In 2001, Pettis and eventual MakerBot co-founders Adam Mayer and Zach Smith wanted a 3D printer. “But they were like $100,000,” said Pettis. “So what do you do when you want something and you can’t afford it? You make it yourself. And we’re not engineers—we’re tinkerers.”

In 2009, they had a machine that almost worked, so they quit their jobs and started MakerBot.

“It was designed to be a really flexible platform … for people at home, not for manufacturers.” The company’s latest model, the Replicator 2X, is designed to be even simpler to put together.

MakerBot introduced the Replicator 2X in September 2012, eight months after the introduction of its earlier Replicator model. The company credits the short time between the models with the decision to have its factory in Brooklyn. Had the factory been a 20-hour flight away in Asia, with the inevitable hassles of doing business in a foreign country, it wouldn’t have worked, said Pettis.

“Making it here, with people who take pride in their work, we just make a better product. Plus,” he said, “Brooklyn is just the best place in the world.”

Speed, or more specifically, the power to act, is essential to Pettis.

When asked by eWEEK where he thinks the industry will be in five years, he giddily pointed out that by the end of this year, MakerBot will launch the 3D scanner that it showed off in prototype at South By Southwest , “and then it’s game on.”

“People want to talk about the future … and I’m like screw that. We’re doing it this year,” he said. “Whatever industry you’re in—where will it be in five years? Go make those major changes right now.”