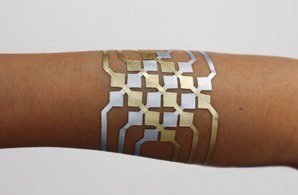 You could use a smartwatch to control the music coming from your smartphone, zipped inside the bag on your shoulder. But how much less expensive, and more expressive, might it be to instead tap a temporary tattoo?

The intersection of wearable devices and body art is the focus of a collaboration between Microsoft Research and the MIT Media Lab.

This September, at the International Symposium on Wearable Computers in Heidelberg, Germany, they’ll present a paper on a fabrication process they call DuoSkin. It uses gold metal leaf as an on-skin conductor for three modalities: touch input; wireless communication with other induction-based devices, such as near-field communications (NFC); and thermochromatic displays, which (think mood rings and plastic forehead thermometers) change color to reflect temperature changes.

“We believe that skin serves as the bridge between the physical and digital realms, enabling users to leverage the personal aesthetic principle that is often missing in today’s wearable tech,” they continued. “It is our vision that future on-skin electronics will no longer be black-boxed and mystified; but they will converge towards the user friendliness, extensibility, and aesthetics of body decorations, forming a DuoSkin integrated to the extent that it has seemingly disappeared.”

Other researchers have imagined using skin as a digital interface. For example, another Microsoft Research team, in collaboration with Carnegie Mellon, experimented with attaching a coin-sized pico projector to the bicep and projecting an interface onto the palm or arm.

Closer to DuoSkin is Skintillates, a project based on silver ink printed onto temporary tattoo paper. That, however, measures 36 micrometers thick, compared with DuoSkin’s 0.8 millimeters, and the silver ink is thought to be less durable over the course of a day or more than the gold leaf.

DuoSkin is reportedly also more cost-effective, requiring little more than gold leaf (often used for crafts, or to top chocolates or float in vodka, it costs about 50 cents for a 15-cm square, say the researchers), tattoo paper, a craft electronic cutter and, of course, a damp paper towel. They can be applied as easily as the tattoos found in a child’s goody bag.

The design is created with a 2D design tool, a stencil is created and cut with an inexpensive cutter ($230), an adhesive is applied to the cut-out stencil and the gold leaf is then stacked in layers. The team estimates that the total cost of creating a 3-by-4-cm NFC tag is less than $2.50.

As part of its research, the group recruited small groups of mostly women to perform tests; in one instance, they were asked to create an original-design tattoo that could control an online music player. All five participants succeeded in creating a working controller, and all used their forearms, calling them the “most suitable location.” The group customized their designs through the colors of metal leaf they chose, but also through their use of “buttons, discreet sliders and continuous sliders.”

Participants noted that their “ability to apply the device themselves made it intimate and something they would like to wear,” the researchers reported, adding that the personal designs also made the end result easier to achieve.

“It’s good I can design my own thing,” one participant remarked, “so I know how it works.”

Sticker-based NFC coils have been used for purposes such as unlocking a phone with a tap, sending preprogrammed text messages or launching a website. When Samsung introduced the Galaxy S III in 2012, it—like Sony with its Xperia Ion—showed off NFC-based TecTiles, postage stamp–sized stickers that sold by the four-pack for $30.

In the health care field, temporary tattoos embedded with electrodes and able to connect with Bluetooth have also been used to record and transmit blood sugar levels—a promising and less painful alternative to finger-prick tests.

The DuoSkin team hopes that the cost of DuoSkin, the ease with which it can be made and the personal expression it allows will usher temporary tattoos into new markets.

“[We] conclude that on-skin user interfaces have the potential to evolve beyond their so-far primary realm: the medical field—a domain that can afford the expensive and elaborate machinery process necessary to build epidermal electronics today,” the researchers wrote.

Important to that idea, they added, is that “wearers themselves must gain aesthetic control over the fabrication process to easily implement their desired functionality.”