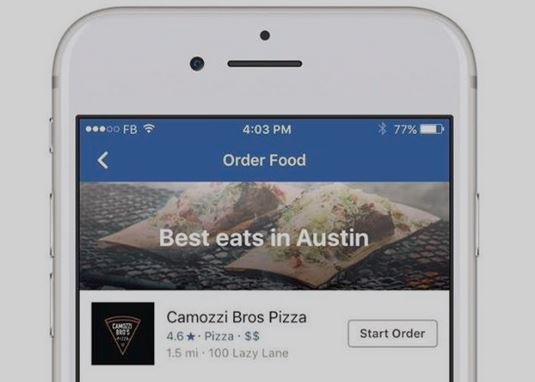 Facebook has found another way to keep users riveted to its pages, and this time it’s through their stomachs.

The giant social network is again using its massive power of scale to inject itself into another business and is–depending upon your point of view–either coordinating or disrupting another industry: food ordering for takeout or delivery.

The social network revealed Oct. 13 that its users can now order food using either the Facebook mobile app or website. The company is partnering with existing services GrubHub, Delivery.com, DoorDash, ChowNow, Zuppler, EatStreet, Slice and Olo and will now connect with those food-ordering businesses for access to restaurants that support them.

Is Facebook actually disrupting those businesses with its intervention? GrubHub, EatStreet and the others make a percentage on their services; it remains to be seen if Facebook will be cutting in on their domain by taking its own percentage.

To use the new feature, users go to their Home page, then look at the left-hand column for Explore. Under that title, they can find the new Order Food area. On the Order Food page, users can click on the type of food they’re seeking (American, Asian, Bar & Grill, Breakfast & Brunch, and so on), which automatically brings up a list of local restaurants and takeout places from which to choose.

Once a hungry user selects a local restaurant, he or she clicks “start order.” From there, if a restaurant supports more than one of Facebook’s ordering partners, users will be able to choose from among them. Once they select one, Facebook brings up an in-app browser that takes users through the existing websites for GrubHub, DoorDash and the others.

This final screen is where the food ordering actually takes place. Thus Facebook is mostly pointing the way and making connections for the restaurants more than anything else.

Still, Facebook undoubtedly will find a way to make money from handling these transactions.

Facebook said users will be able to browse restaurants near them that take orders via the delivery services noted above and directly from restaurants that include Papa John’s, Wingstop, Panera, Jack in the Box, TGI Fridays, Denny’s, El Pollo Loco, Chipotle, Five Guys and Jimmy John’s.

“We’ve been testing this since last year, and after responding to feedback and adding more partners, we’re rolling out everywhere in the U.S. on iOS, Android and desktop,” Facebook Vice-President Alex Himel said in a media advisory. “People already go to Facebook to browse restaurants and decide where to eat or where to order food, so we’re making that easier.”