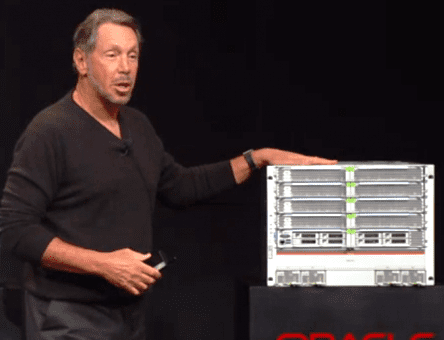 REDWOOD CITY, Calif.—As far as Oracle’s senior vice president, John Fowler, is concerned, the message the company sent at the March 26 launch of two new enterprise servers is simple: “It’s not that complicated. Our servers just got bigger, faster, better. And they will cost less.”

Well, those claims may or may not be true for each customer. Every system and production requirement is different, and the pricing claim—generally one-third the cost of competing IBM servers —doesn’t take into account software licensing and lots of other side dishes that might be required to make it all work optimally.

But beyond all the usual-suspect claims at such a launch event, there was some longer-range news that lifted some eyebrows.

Part of Oracle’s story at the launch of new T5 midrange and M5 high-end enterprise servers on March 26 was the realization that, even though the company has been doubling the speed and capacity of its server hardware with each new update for each of the last few years, there will come a time when it simply won’t be possible to keep doing that, using the same design.

So, CEO Larry Ellison said, Oracle now is moving to a new level of performance by eliminating that last gap data bits have to jump: over the separation of hardware and software. Ellison specifically cited integrating databases and Java accelerating functionality right into the silicon as being important breakthroughs.

If this is indeed the case, putting that kind of huge enterprise functionality into a chipset is indeed innovative. Something like this has never been commercially successful previously.

Oracle is trodding the same path upon which Intel embarked years ago with its x86 chips. McAfee security famously is now in them, for one example. But Ellison’s company is attempting to bake more and more functionality directly into the SPARC processors that Sun Microsystems developed over the course of three decades.

Oracle already does this with such features as encryption and decryption, Ellison reminded attendees during the launch event at the company’s campus briefing center. “We already showed that you can do this. Why can’t you do it with the database?” Ellison asked.

Aim Is to Continue Doubling Performance

This is not a new development for Oracle, but it has been kept somewhat hush-hush.

“We’re actually years down the road on this,” Fowler, who ran the hardware division at Sun and now does the same for Oracle, told eWEEK. “We put together a team that combined silicon and database and came up with hundreds—even thousands—of cool things to do. We didn’t go with that list. What we did was write simulations of some of those things to figure out whether they actually would make a difference or not.”

What Oracle got out of that exercise was a subset of applications that the company really thought would improve application performance, Fowler said.

Integrating Coprocessors Into the Silicon

“Larry’s very excited about talking about one specific thing (databases in silicon), but what we are doing in future processes is we actually integrated coprocessors directly into the chip that has specific semantics that the database and applications know about,” Fowler said. “One of the features we’ve been working on is this memory-scan feature that Larry talked about.”

Memory-scan is the operation of looking through memory for stored objects; this is offloaded from the logic in Oracle’s new designs. “This is very far along from a design standpoint,” Fowler said.

This is all impressive work. But the big question is this: Will Oracle be able to bring all this new functionality to market in time to quell what certainly looks like the beginning of a down period in its hardware sales?

In its March 20 quarterly earnings report, Oracle revealed that hardware sales, which amount to about 10 percent of the company’s $40 billion annual business, had slipped by 23 percent from the previous quarter. This is an alarmingly fast drop.

“I’m trying to find the silver lining here—looks like the software update and support business was better,” Barnicle said. “But pretty disappointing on the hardware side of the business in particular, which came in at $671 million. Consensus had been for $796 million.”

“On the hardware side they’re facing the same headwinds that everybody is facing, as you get more consolidation and commoditization of hardware,” Barnicle added.

The industry will be watching closely as Oracle moves into a super-silicon production phase. Ellison and Fowler are sure hoping that the T5-8 as well as the M5 chips and servers will help turn around the sales numbers.