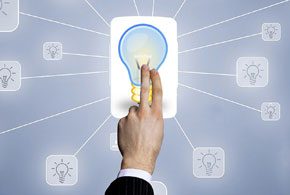 In partnership with the Hasso Plattner Institute, an IT-focused university in Germany named after the SAP co-founder, the company set up SAP Next-Gen in one of the newer buildings to sprout up in the up-and-coming Hudson Yards district in Manhattan. Located on the 48th floor of SAP’s new offices, floor-to-ceiling windows offer panoramic views of the Manhattan skyline and surrounding areas while an open and modular floor space encourages experimentation and the sharing of ideas.

Ann Rosenberg, vice president and global head of SAP Next-Gen, believes many of those ideas will come from today’s tech-savvy students.

SAP has partnered with universities for years, typically to recruit talent. Around three years ago, a shift in strategy occurred, Rosenberg said. The German business software maker saw an opportunity to crowd-source innovation with academia’s help.

By engaging directly with the research departments of universities, SAP has started narrowing the gap between cutting-edge research and the IT industry. Using this approach, “universities begin to have a more of a consulting research role for the corporate world,” bringing new innovations into the mainstream at an accelerated pace, Rosenberg told eWEEK.

Rosenberg described a “reverse learning model” where businesses are beginning to learn from schools, instead of the other way around.

“If you’re looking for the new thinking, the next generation of everything, you really need to go to universities,” she said. “We see it with machine learning, we see it with blockchain, we see it with IoT [and] the way you use devices for enterprise applications. It is at the universities [where] that knowledge is the strongest right now.”

The SAP Next-Gen program’s airy new digs support that vision by providing an adaptable space where visitors not only learn about new technologies, but can experiment with them and explore how they may affect the way business gets done.

For Julie Samuels, executive director of Tech:NYC, a nonprofit organization representing New York’s technology sector whose founding members include Facebook and Google, SAP’s new innovation center is emblematic of the area’s rising prominence as a hub for technology startups. New York is unrivaled for the access it provides to capital, industry and even creativity, she said during one of several addresses given today.

Samuels told eWEEK that her team plans to use the space to gather and help “find a center of gravity for our community.” That community includes FinTech (financial technology) firms, which is unsurprising given Wall Street’s proximity, and startups that are innovating “across every vertical in New York” including real estate and the arts, she said.

In the coming weeks and months, the space will host boot camps, hackathons, industry summits and various meetups. SAP has also carved out an area for “makers”—people who are inspired to create new devices or products. Here visitors are allowed to experiment with the latest innovations.

Another of SAP Next-Gen’s aims is to innovate “with a purpose,” Rosenberg. The program supports the United Nation’s Global Goals initiative for sustainable development, she said. The goals include gender equality, clean energy and an end to hunger.