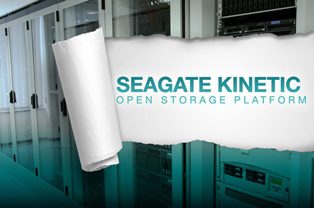 Say what? Aren’t those things mandatory in a standard enterprise storage system? They are indeed–for conventional enterprise systems, that is.

The Cupertino, Calif.-based company, which launched Kinetic in October, claims that this is the first device-based storage platform that enables independent software vendors, cloud service providers and enterprises to optimize scale-out file and object-based storage and save serious capital outlays at the same time. This is because a new storage system built without legacy equipment doesn’t require the old-school hardware and software layers of the past.

The new system is aimed directly at the burgeoning object storage software market, which IDC projects to be worth $23 billion by the beginning of next year.

“We have developed a new API (application programming interface) that’s being used now by a couple of stacks (OpenStack, Amazon S3),” Seagate storage business development director Ali Fenn told eWEEK. “All the storage management-type applications, whether that’s a Swift, or HDFS or whatever the big cloud guys may be doing, like Scality on the proprietary side–any of those applications–can now have a new pluggable backend that talks key value, and it talks over Ethernet straight to the drives.”

So, in effect, Seagate Kinetic Open Storage becomes a sort of clearinghouse for any type of storage software in a cloud-ready system.

Fenn said that this is designed for “very easy integration into various stacks. The key value interface lets applications that deal in object storage to speak in their language directly to the device. No longer does data have to transit down through multiple layers of legacy overhead that were designed for a different era.”

When you add Ethernet to that, Fenn said, then suddenly you have a couple of key innovations, but really you are breaking free from the constraints of SAS and SATA.

With the storage server tier of traditional data center architectures eliminated by enabling applications to speak directly to the storage device, expenses associated with the acquisition, deployment and support of hyperscale storage infrastructures are reduced, Fenn said. Devices that can be connected to Kinetic Open Storage include Ethernet interfaces, key value store and cylinder, head and sector drive HDAs (head disk assembly).

The system is available now. Go here for more information.