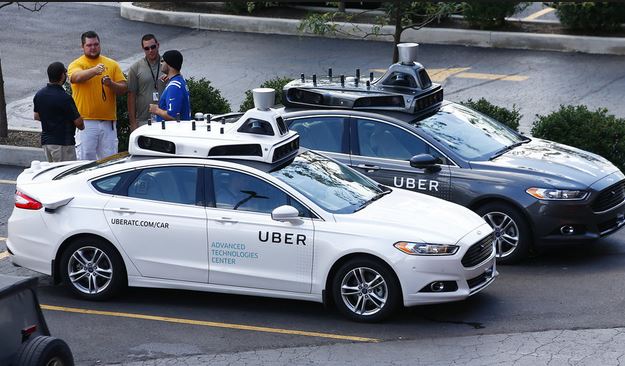 Uber gassed up 11 of its self-driving Volvos Dec. 14 to roam the streets of San Francisco, pick up brave passengers and gather information for future driverless vehicles.

The fast-growing ride-hailing company, whose new headquarters originally was in San Francisco but is in the process of moving across the bay to Oakland, has the sensor-packed vehicles here to do a couple of jobs.

One, of course, is to randomly pick up customers and transport them to their destinations, while job No. 2 will be to do some fact-finding around mapping and sensor research.

Safety Driver on Hand at All Times

No matter what, a trained safety driver will be on hand to take the wheel in case the on-board IT detects the need to offload control of the vehicle.

This isn’t the first test of the company’s automated vehicles; the company has been testing them in Pittsburgh, Pa., for the last 90 days or so.

Uber is working uder a $300 million partnership with Sweden’s Volvo to develop self-driving IT. However, it began testing a small fleet of Ford Fusion hybrids last August in Pittsburgh, which is where Uber’s autonomous car research and development center is located.

How Uber Made the Announcement

“We’re excited to share some big news. Starting today, Self-Driving Ubers will be on the road in San Francisco. Self-driving cars have been picking up and dropping off riders on the streets of Pittsburgh for the last 3 months, and now we’re excited to bring them to our hometown.

“Ready to take a ride in a Self-Driving Uber?

–How do I request a Self-Driving Uber? Simply open your Uber app and request an uberX. A Self-Driving Uber will pick you up if one is available. Note: Self-driving vehicles not for you? Simply hit cancel if you receive an in-app notification for a self-driving car and you’ll be matched with a driver.

–Is there a driver in the car? There is an experienced vehicle operator who will be in the driver seat to ensure a smooth ride. See what it looks like here.

–How many people can join me? Three riders can fit in a Self-Driving Uber.

–Can I change my destination mid-trip? Once you’re on your way, you will not be able to change your destination.

–I heard there is a camera in the car. That’s correct. To learn more about how we can improve the self-driving experience for our riders, your trip may be recorded.

–What does it cost? The price of a ride in a Self-Driving Uber is the same price as an uberX.

“Now watch as a Self-Driving Uber makes its way around our beautiful city. And, thanks for venturing into the future with us.”

“We hope you enjoy the ride,

Still a Lot of Wrinkles to Be Ironed Out

Government agencies at the state and local levels have scrambled much of the year trying to set guidelines in order to avoid a patchwork of self-driving cars rules, which risks making a driverless car legal in one state and illegal in the next. The permitting processing is in a state of flux at this point.

Google, which has been developing and testing driverless vehicles for more than six years on California streets, revealed Dec. 13 that it is in the process of spinning off its self-driving car team under a new name, Waymo, and will soon begin commercializing its car-sensor IT.