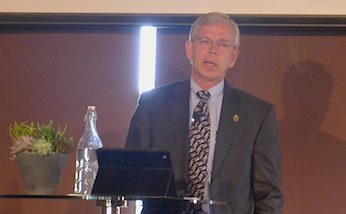 The event was convened to offer details that McAdam had promised at the Consumers Electronics Show in January, when he announced the creation of the $10 million Verizon Powerful Answers Award.

“Our goal is to inspire the best minds in the industry to apply their minds to the areas of health care, education and sustainability,” said McAdam. “We’re convinced … we will create new markets and change the world for the better.”

He added that people are opening their minds to “disruptive innovation” in the contest’s three markets. “We think the world is ready for this,” said McAdam.

Verizon is now officially accepting submissions on its Web site. The contest is open to anyone 18 and older, anywhere in the world. Individuals, startups or businesses can apply.

Today through June 30, Verizon will accept ideas—submitters will be asked to spell out the problem that their idea is designed to solve, what makes it unique, and why people, or the market, will be excited about it.

In a second phase, Verizon will narrow down the submissions, ask the applicants more questions and drill deeper into the business details of an idea and its ability to have a major impact in the world.

Finally, the ideas will be narrowed down to 10 finalists in each category. Those finalists will then present their ideas in person to a carefully selected “blue-ribbon” panel of judges, said McAdam.

McAdam said that winning a prize wouldn’t disqualify anyone from pursuing other funding opportunities.

“This is designed to give seed money to people who would otherwise have a hard time bringing their ideas to market,” he said. “It does not indicate exclusivity to Verizon.”

Joining McAdam on stage as a booster of the prize was Dr. Margaret Honey, from the New York Hall of Science, an organization that has been a recipient of Verizon’s financial largess and that offers programs for children that make science, technology, engineering and math (STEM) exciting and fun. It has an agenda of encouraging kids to be the creators of things, instead of the consumers of them.

“It’s an incredibly important initiative,” said Honey. “I encourage my colleagues … to take note of the contest and put their ideas forward. … Powerful ideas can in fact lead to powerful answers.”

McAdam said that it has yet to be determined whether the award is a one-time opportunity or will become an annual contest. “I wouldn’t rule it out one way or the other.” When asked why Verizon had decided to frame the funding as a contest, he said that a contest would give it a certain amount of extra visibility.

Plus, he added, “A competition really gets the juices flowing.”