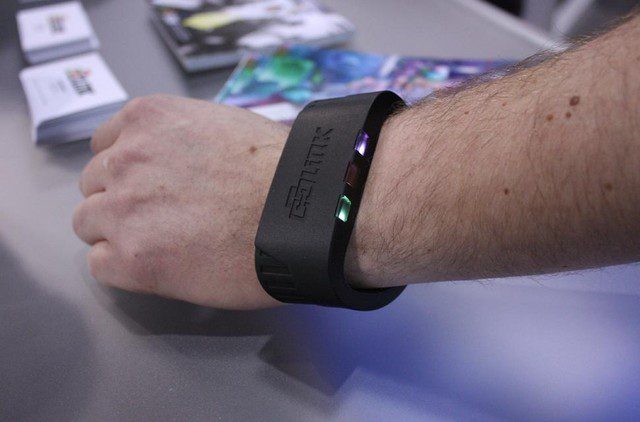 We all know about wearables, such as Google Glass, Jawbone and Fitbit, which measure and record data points that we can see and feel and send them into a cloud account. But did you know you can also obtain a wearable wristband holding secure data storage that’s connected—but not to the cloud?

It’s called The Link, and it’s made by a startup called Fasetto based in Superior, Wis. The device—which isn’t much larger than a wristwatch—offers a healthy 1TB of solid-state digital storage that can be made accessible on up to 20 devices and can stream to as many as seven devices at a time.

And how convenient to have all this storage right on your wrist.

The primary objective behind the creation of the device was convenience and security, Fasetto co-founder and CEO Coy Christmas told the Superior Telegram.

The Link effectively circumvents the cloud by creating a sort of small localized cloud of its own. Because data on it doesn’t have to move from the device to an uncharted cloud system server somewhere in the world—and which, as we all know, can be hacked—Christmas said the user never has to access his or her data over a server or service provider data plan.

After it is connected to a smartphone, tablet or laptop, data is stored directly on the Link and can be accessed through the Link application on any device, using any platform, including Android, Linux, iOS or Windows. Data writes to the Link disk at the rate of 470 megabytes per second, Christmas said.

The storage read speed is 530M bps, and data sends and receives wirelessly at a speed of 1,300M bps. A WiFi chip built into the device provides the device connections.

The Link has a long battery life—up to two weeks in standby and 12 hours streaming, Christmas said.

Here’s a possible use case: A user could walk into a phone store, buy a new phone on a different platform than the one he had been using and walk out five minutes later with all his data now available on his new phone because it’s stored on the Link. And the information he accessed from his old phone would not be available to anyone else.

There may well be quite a market for private clouds of this type. Christmas said his company is planning to make 3,000 units to be shipped in September to people who sign up through the IndieGoGo project Website. It will then go to mass production with a launch expected in 2016 during the Consumer Electronics Show, he said.

A fundraising campaign has also been set up at Kickstarter. Search for Fasetto.