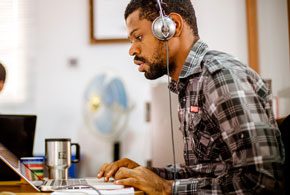 “Brilliance is evenly distributed, but opportunity is not.”

That’s the founding principle behind Andela, a 2-year-old startup that’s bringing together brilliant developers in Africa with opportunities in America—and that today announced it’s the first major funding recipient of the Chan Zuckerberg Initiative.

CZI, founded by Facebook founder Mark Zuckerberg and his wife, Pricilla Chan, led Andela’s Series B funding with an investment of $24 million.

“The round represents a huge vote of confidence from some of the most respected names in technology,” Andela CEO and co-founder Jeremy Johnson wrote in a June 16 letter to investors and advisers, shared on the Andela blog. “Not only is it a vote for Andela, but it’s also a recognition of the caliber of software developers and human beings that make up the Andela Fellowship.”

“I was lucky to be born in a wealthy country where I had access to computers and the internet. If I had been born somewhere else, I’m not sure I would have been able to start Facebook—or at least it would have taken a lot longer and been more difficult,” he wrote.

Zuckerberg added that the talent-opportunity gap is among the most dramatic in Africa, where six out of every 10 Africans are younger than 35, and in some places more than half of them are without work.

“Priscilla and I believe in supporting innovative models of learning wherever they are around the world—and what Andela is doing is pretty amazing,” Zuckerberg added.

Andela has offices in Nairobi, Kenya, and Lagos, Nigeria, where it employs close to 200 engineers. Its four-year Fellows program is highly selective—to date, it has accepted less than 1 percent of the candidates from the more than 40,000 applications it has received.

Once selected, Fellows receive 1,000 hours of training over six months and then are paired with a U.S. company in need of development help. Andela educates the Fellow about the Andela customer company’s culture and needs and then flies the Fellow to that company’s headquarters for two weeks, to build trust with the team members and strategize a roadmap. After that, the U.S. team and the Andela developer communicate online daily.

“They’re working in your time zone, communicating in your Slack channels and participating in your daily stand-ups,” explains the Andela site, emphasizing its goal of providing as friction-free a service as possible.

The U.S. company gets a great developer; a brilliant person, with fewer local opportunities, gets a great job; and the hiring process is less stressful and time-consuming for the hiring company, as Andela does all the screening and interviewing on its end, it states.

To date, Andela clients include Microsoft, IBM and Udacity.

Diversity is a proven contributor to success, as is the inclusion of women in working groups and particularly in leadership positions.

Andela has a goal that 35 percent of its software development team should be women, Christina Sass, one of Andela’s four co-founders, told CNN Money, adding that it has been “very disciplined” in that effort. In the spring, it hosted an all-female boot camp in Kenya and made an effort to communicate to women’s families that Andela is a safe place to work. Ultimately, 1,000 women applied, 41 were selected for the boot camp and nine were accepted into Andela, according to CNN.

As part of Andela’s vision to train 100,000 world-class developers over the next 10 years, on June 14 it announced three- and six-month internship programs in Lagos for creative thinkers, excellent problem solvers and people willing to “become the CEO” of their own work.

Benefits, it noted, include breakfast and lunch, a passionate working environment and, an opportunity to work with some of the brightest minds on the planet. “Oh,” it added, “and a chance to change the world!”