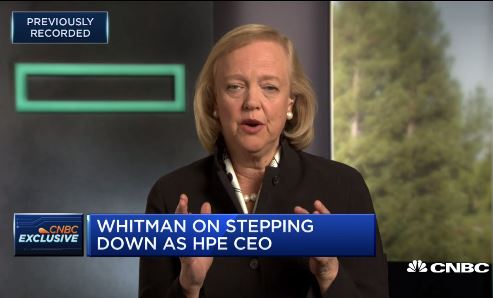 By next spring, Margaret C. Whitman, known internationally as Meg, won’t have to worry about the day-to-day business of a major IT corporation anymore. At least not for Hewlett-Packard Enterprise and HP Inc.

During HPE’s quarterly report to analysts and investors Nov. 21, the board chairman and chief executive officer revealed that she will be stepping away in February from the lightning-rod job she has had for the last six-plus years. She will be replaced by 23-year HP veteran Antonio Fabio Neri, the current president of HPE.

Whitman, who will remain on the HPE board, has planned ahead, downsizing from her large Atherton estate to an apartment in Palo Alto, Calif. and a mountain home in Telluride, Colo.

By the Numbers, Whitman Was a Success

Critics say Whitman raised the value of the stock by cutting costs at HP, and they have a point. But the company has been managed by her and her team to stay in the financial black while revenues have leveled off and declined–mostly due to competition from smaller, more nimble new-gen software and hardware companies.

HPE and HPI have remained vital cogs in the international IT business through sales of printers, servers, storage, networking equipment, laptops, workstations, management software and a ton of services–in person and in clouds–to cover all of them. HPI has stayed among the world’s top three portable computer makers (Dell, Lenovo, HPI) for most of the last decade; HPI is the world’s No. 1 printer maker; and HPE’s storage, server and networking businesses have maintained profitability despite all the competition.

Whitman’s Tenure Marked by Acquisitions and the Big Split

In fiscal 2016, after the company split into two–HP Inc. and HP Enterprise, in 2015–she earned a cool $35.6 million, which included stock options worth $11.7 million alongside restricted shares worth $19 million if she meets certain performance requirements.

Whitman’s tenure at Hewlett-Packard was marked by a major split, a big spinout-merger, numerous acquisitions and several division sales that changed the legendary 78-year-old Silicon Valley company forever. The company was forced to evolve all through the first decade of the 2000s, when it made a $25 billion acquisition of Compaq in 2002 under then-CEO Carly Fiorina and a subsequent $11 billion acquisition of British analytics firm Autonomy that turned out to be a huge mistake.

The spinout-merger of HPE’s software business into Micro Focus, which became official Sept. 1, was another major milestone in Whitman’s time at the helm.

The Autonomy deal was not a high point. It made under short-term CEO Léo Apotheker, who came from SAP and turned out to be ill-suited for the job. He lasted less than one year (2010-2011) before being replaced by Whitman.

At the time, HP had fired its previous CEO (Mark Hurd, now at Oracle) for expenses irregularities, and appointed Apotheker as CEO and president. At the time, HP was seen as problematic by the market, with margins falling and having failed to redirect and establish itself in major new markets, such as cloud and mobile services. Apotheker’s strategy was to dispose of hardware businesses like Palm and move into the more profitable software services sector, a strategy competitor IBM was also enacting at the time.

As part of this strategy, Autonomy and its analytics franchise was acquired by HP in October 2011. HP paid $10.3 billion for 87.3 percent of the shares, valuing Autonomy at around $11.7 billion (£7.4 billion) overall, a premium of around 79 percent over market price. The deal was widely criticized as chaotic attempt to rapidly reposition HP and enhance earnings, and had been objected to even by HP’s own CFO.

Other problems eventually surfaced surrounding Autonomy, including allegations that it oversold its capabilities to Apotheker and other HP executives. After Apotheker was fired in September 2011, HP had to write off $8.8 billion of Autonomy’s value. Litigation surrounding the ill-fated deal continues to this day.

This is the unsettled scenario in which Whitman arrived in the CEO chair, although as a board member she certainly had to see some of the problems coming. Repercussions of these problems are still being felt today.

Layoffs Were Her Biggest Challenge

As a result of this turmoil, a large part of Whitman’s job was about being the heavy. In her six-year tenure, Whitman had to do what managers universally hate to do: oversee the layoffs of employees. At last count, the number of those let go amounted to nearly 85,000. HPE and HP Inc. together still employ about 250,000 people worldwide.

Eighty-five thousand. That’s more than too much displacement for anybody to have to handle. Firing even one person is difficult.

HR and acquisition issues not withstanding, Whitman has said she is optimistic about the company’s new leadership. See this CNBC video.

“We have a much smaller, much nimbler, much more focused company,” Whitman said on the earnings call Nov. 21. “I think it is absolutely the right time for Antonio and a new generation of leaders to take the reins.”