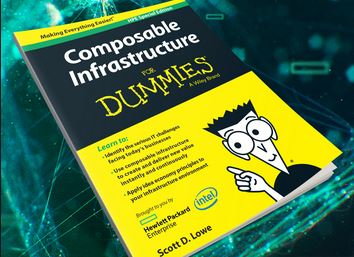 Hewlett-Packard Enterprise introduced its composable infrastructure concept three years ago at the Discover 2015 show in London. On that Dec. 1, the company unveiled its Synergy platform, which is based on an infrastructure architecture designed to ensure that the exact amount of compute resources—from processing power and storage to network fabric and virtualization—can be rapidly pulled together from a single resource pool to support an application, and then returned to the pool when they’re no longer needed for the workload.

Three years later, and nearly to the day—but this time in Madrid—HPE showed that it has evolved to the next phase of its composable platform. As of Nov. 26, it now includes delivery of cloud services through what HPE calls its Composable Cloud, a hybrid cloud platform that offers software-defined automation, a modern fabric providing non-disruptive scale across racks and data centers, and a unified API.

HPE said that Composable Cloud for Synergy “adds flexibility and performance to address any workload within a private or hybrid cloud environment.”

Synergy, which has enlisted 2,200 customers in three years, is the industry’s first composable infrastructure platform. It includes a simple, automated management experience but is designed to address heavy-duty workloads such as SAP and Oracle, as well as cloud-native applications or mixed workloads.

The modular architecture of HPE Synergy provides a choice of network interconnects and storage options, including SAN-based storage, direct-attach, IP-based and software-defined storage. In addition, the HPE Synergy Image Streamer enables it to accelerate customers’ DevOps initiatives, enabling IT to provision infrastructure with a wide array of tools, such as Chef, Ansible, Puppet and VMW.

Composable Cloud provides a software stack that allows enterprises to benefit from choice of public and private clouds: AWS, Azure or Google Cloud. Or another, if someone so chooses.

Choice is always good for users. The ability for an enterprise to select its own storage, hypervisor, cloud services and networking under a single management provider allows for an array of choices that make all this much easier and more efficient for the owner of the system—minus the vendor lock-in that used to be standard.

Despite all this ostensible “click-choose-and-go” fluidity, the transition to hybrid cloud environments still can be slowed by the need for specialized skills to build and operate proprietary cloud stacks. HPE, as one might expect, espouses that enterprises require a “cohesive approach that spans people, technology and economics.”

Thus, HPE is offering Composable Cloud backed by its own processing components to bring together IT automation, AI-driven operations, security and compliance in a cloud platform designed to scale. The new cloud stack gives customers lots of choices across composable-infrastructure building blocks. This includes for the first time HPE ProLiant DL rack servers and the HPE Synergy platform to compose any workload, any service and across any cloud, in a just-in-time manner.

Not planning to miss any ‘just in time’ deadlines

Hopefully, these scattered components that come together inside the computing fabric to do the processing and data movement work don’t show up late and miss any deadlines. HPE, naturally, doesn’t plan for that to happen.

“When we talk about Composable Cloud, we’re talking about the combination of technologies that we’re offering,” HPE’s Lauren Whitehouse told eWEEK. Whitehouse is a former Enterprise Strategy Group analyst who now is marketing director of HPE’s Software-Defined and Cloud Group.

“Everything is layered on to this total solution, starting with the HPE ProLiant DL server. We’re putting everything together for them, providing a complete integrated solution for them.”

HPE Composable Cloud is managed as a resource by HPE OneView. HPE OneSphere is the developer portal for all of this.

Composable Fabric was first introduced inside HPE Synergy and is now available—as part of Composable Cloud—outside of a modular architecture and across the data center. This enables IT to operate like a hyperscale cloud provider without requiring network expertise.

HPE claims that by using Composable Cloud, IT staff can scale the infrastructure in real time without needing specialized networking skills; can compose clouds and workloads in minutes; and manage on-premises and public cloud resource utilization and costs in a uniform way. The solution is designed for cloud-native workloads and rack-scale environments with template-driven automation, which streamlines the deployment of cloud stacks and automates the lifecycle, initially supporting Red Hat OpenShift and VMware workload deployments.

Key features of HPE SimpliVity with Composable Fabric are:

HPE OneSphere is currently available in the U.S., United Kingdom and Ireland, with additional geographies targeted in the coming year.