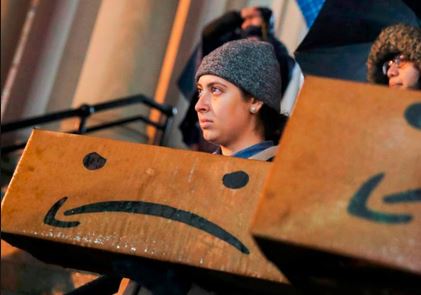 Fierce opposition from local politicians, community activists and union leaders has led Amazon to drop its plans to develop a second headquarters in New York City.

The huge online retailer on Feb. 14 canceled its plans to build a large corporate campus in New York City after facing a stern backlash from an alliance of local organizations, who claim that Amazon did not deserve a package of nearly $3 billion in government tax and other business incentives.

In a statement on Amazon’s blog, the company said: “We’ve decided not to move forward with our plans to build a headquarters for Amazon in Long Island City, Queens.”

The statement also said that while its polls showed that more than 70 percent of New Yorkers supported  the Amazon headquarters, “a number of state and local politicians have made it clear that they oppose our presence and will not work with us to build the type of relationships that are required to go forward with the project we and many others envisioned in Long Island City.”

The opposition to Amazon became clear in early February when New York State Sen. Michael Gianaris of Queens, a vocal critic of Amazon, was appointed to the Public Authorities Control Board, which has the power to veto the Amazon deal. In addition, a powerful local union–the Retail, Wholesale and Department Store Union–fiercely opposed the deal, primarily because Amazon isn’t a union shop.

“Rather than addressing the legitimate concerns that have been raised by many New Yorkers, Amazon says ‘You do it our way or not at all, we will not even consider the concerns of New Yorkers’ – that’s not what a responsible business would do,” union spokesperson Chelsea Connor wrote to eWEEK.

Other organizations suggested that opposition to Amazon’s plans in any form was some sort of civic duty.

“Instead of proving themselves as a responsible corporate neighbor willing to work with the city, Amazon fled the moment their massive giveaway was at risk,” said Jamila Brown, communications director of Sum of Us, a consumer advocacy group. “This should be a warning sign to other cities–Amazon isn’t interested in strengthening your community or harnessing local talent; they’re interested in your money.”

Amazon’s plans to build the other half of its HQ2 in Arlington, Va., remain unchanged, as do its plans to build a Center of Excellence in Nashville, Tenn. The Virginia location would add 25,000 highly paid positions to Northern Virginia, which is already a significant tech magnet. Amazon already has its headquarters for Amazon Web Services headquarters in Northern Virginia, as well as other facilities in the area.

At this point, there are no plans to increase the size or scope of the Virginia operations. However, unlike in New York, both Virginia and Tennessee have welcomed Amazon, and the Virginia incentive plan has already passed the legislature in Virginia and has been signed by the governor. Tennessee officials have already gone on record as encouraging Amazon to refocus its plans on Nashville.

The Amazon HQ2 situation has demonstrated that companies seeking to relocate into an area from elsewhere need more than assurance from state leadership. They also need to ensure that they have support from local authorities and community leaders.

In the case of the New York headquarters, Amazon found that attempts to go around local governments, as was the case here, can be fraught with difficulty. The local city council took umbrage at being sidestepped, local advocates were upset at what they saw as being blindsided by the decision, and local politicians saw the event as a way to build their own reputations at Amazon’s expense.

Alexendra Scepanovic, managing director of New York’s Ideal Properties Group, a major real estate developer in the city, said that at least part of the issue was rooted in Amazon CEO Jeff Bezos’ recent troubles. “He could use some smooth sailing right now,” she said. She also said that some real estate speculators will find that their hopes for quick returns on investments in Long Island City will have to wait a while longer.

Scepanovic said that there are a number of other companies that had been looking for deals similar to the one that Amazon received may be discouraged. But she said that there is still demand for business locations in New York, so that eventually the jobs and investment will come.

Is New York Not a Welcoming Culture?

However, a number of observers have suggested that large tech companies looking for an East Coast location my find that New York isn’t welcoming them. Partly it’s because New York’s culture doesn’t exactly welcome outsiders, and partly because of the level of distrust between the state government and the localities. The opposition to Amazon was partly due to the fact that it’s not a haven for unions, and that’s going to be a problem for a number of tech firms that are used to doing business without them.

Amazon’s primary reason for having two locations for its HQ2 was so that it would be easier to recruit tech talent, believing that the pool in Virginia and in Tennessee wasn’t large enough to meet the company’s needs. Considering that Virginia has been actively seeking tech sector employment for decades and has very low unemployment, Amazon could well be right.

Instead, Amazon plans to spread the wealth around. “We will proceed as planned in Northern Virginia and Nashville, and we will continue to hire and grow across our 17 corporate offices and tech hubs in the U.S. and Canada,” the company said.

The decision by Amazon is a setback for both the company and New York, and while the local politicians and advocacy groups will crow about their power and influence, it’s New Yorkers who won’t have the opportunity to land one of those very high-paying jobs, and the local and state governments that won’t see those tax revenues which will far exceed the incentives over time.