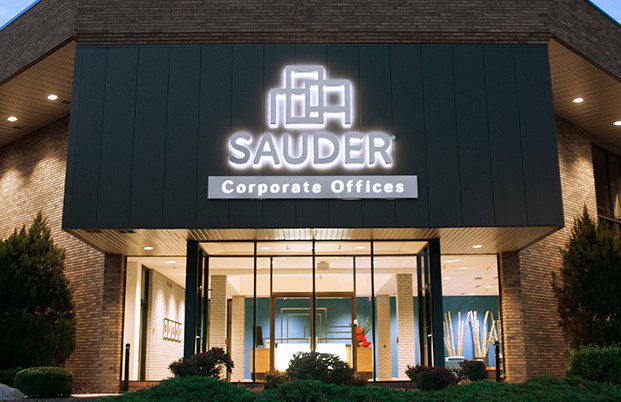 Waste not, want not. This classic cliché keeps us all on notice, that frugality will pay dividends in more ways than one; and that frivolous behavior will not foster good fortune.

Carpenters understand this truism intrinsically, because they simply must. In the business of woodworking, you need to be extra careful not to push the envelope. Careful is as careful does.

This is especially true for the age-old practice of making furniture, a discipline that often demonstrates the finest skills a carpenter can achieve: design, artistry, attention to detail.

That’s a mantle the creator of Sauder Woodworking chose to carry. Launched by Erie Sauder from a barn behind his Archbold, Ohio, home, way back in 1934, the original focus was custom cabinetry and church pews. But before long, Erie saw growing opportunities.

Shortly after the saws first sang, he envisioned creating occasional tables from the leftover wood. This quickly developed into a line of business all to itself, so much so that in 1940, a traveling salesman who experienced this craftsmanship placed an unbelievable order.

Much to Sauder’s surprise, this enterprising agent asked for not 10, or 50, or even 500 tables. He placed an order for 25,000! The request seemed impossible at the time, but the burgeoning company rolled up its collective sleeves, broke out the tools and got to work.

This was an early example of a practice now referred to as “scaling out” the workload. Even back during the height of World War II, this particular company demonstrated a remarkable ability to meet customer demands, in an industry that requires a rather sophisticated supply chain.

But the spirit of innovation didn’t stop there. By 1953, Sauder took its game to the next level by rethinking the nature of furniture assembly. They created the first line of tables that would be shipped in parts, then assembled by the customer. So began the “some assembly required” era.

Today, Sauder excels as the leading producer of ready-to-assemble furniture in America, and is one of the top five residential furniture manufacturers in the country. They boast 4 million square feet of floor space, filled with high-tech furniture-making equipment from around the world.

And the commitment to the finest technology extends beyond the shop floor, all the way to the back office. In fact, Sauder is one of the first companies in the world to embrace the most advanced system for business management available today, a completely in-memory solution.

Yes, the venerable furniture manufacturer from small-town Ohio took the bull by its horns, and is now effectively running SAP S/4HANA, the next-generation Enterprise Resource Planning (ERP) solution by the German software giant. And they got it up and running in months.

“I’m excited to be running S/4HANA, and we’re glad that we can take advantage of newer technologies that are available today,” said Jan Arvay, Vice President of Information Technology for Sauder, who’s been with the company for more than 20 years.

Her colleague, Pam Vocke, echoed that sentiment: “I too have been with Sauder over 25 years, had the opportunity to be involved in many of our SAP implementations throughout the years, and we are very excited about being on S/4HANA and to share our story.”

Vocke explained that Sauder began implementing SAP back in 2004: “We started with order to cash, and we took a phased implementation approach, actually finishing up implementing all of the main modules by 2015; and that’s the time that S/4HANA was announced.”

This presented a significant conundrum. On the one hand, the decision could have been taken to optimize all the modules now in place on-premises. This would certainly require less work than rolling out the new in-memory solution. But S/4HANA would provide significant benefits.

Here’s where the DNA of this enterprise came shining through. Suffice to say, carpenters have a particular understanding of sunk costs. One false move and an expensive resource can become significantly less valuable. Hence the care and concern with which decisions are made.

They spent 2016 really evaluating their options, living up to the carpenter’s mantra: measure twice, cut once. And ultimately? The Sauder team doubled down; they decided to get way out ahead of SAP’s 2025 maintenance deadline.

“We’re in business to make furniture,” said Vocke. “We really wanted to be on our own timeline. We took the necessary steps, converted, and now we feel that we’re in a great position to take advantage and optimize the use of S/4HANA.”

The next big decision? Whether to go greenfield (new implementation) or brownfield (system conversion). The former involves setting up a clean installation of the ERP, then importing all the relevant data. The latter focuses on converting existing system, leaving all the data in place.

“We’re in a great position because we took a brownfield approach, and we’re actually kicking off a finance optimization project,” Arvay said. “We’re going to hit different areas of the business based upon strategic initiatives, to turn on functionality and take advantage of what’s in it us for.”

Arvay explained that a key consideration for their decision to go brownfield was the number of employees who would be impacted by the conversion: all 2,000 of them! “We didn’t want to deal with a lot of change management, and actually, it was a smooth cut-over.”

How smooth was the transition? Let’s just say they hit the magic number: “The second night we had zero help desk calls,” Arvay said. Wow. Sometimes, zero is the ideal number.

“I think we were pleasantly surprised,” said Vocke. “We had a great group of consultants that were assisting us. We had SAP Value Assurance, and the Enterprise Support team at SAP.”

Now Sauder is prepared to scale out any which way, as they continue their nearly century-long run, carving out a reputation of quality, innovation and creativity.

Eric Kavanagh is CEO of The Bloor Group, a new-media analyst firm focused on enterprise technology. A career journalist with more than two decades of experience in print, broadcast and Internet media, he also hosts DM Radio, and the ongoing Webcast series for the Global Association of Risk Professionals (GARP).