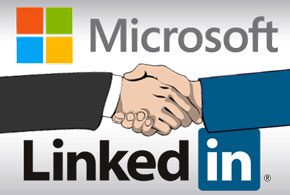 Microsoft dominated technology headlines on June 13 by announcing that it is in the midst of a deal valued at $26.2 billion to acquire LinkedIn, the Mountain View, Calif.-based social network for professionals.

In his letter to Microsoft employees, CEO Satya Nadella remarked on the potential synergies between his company’s business and productivity software and cloud services offerings and LinkedIn’s impressive reach. According to the companies, LinkedIn has more than 433 million members across over 200 countries and territories. Microsoft, meanwhile, claims to have more than 1.2 billion Office users.

“Over the past decade we have moved Office from a set of productivity tools to a cloud service across any platform and device,” wrote Nadella. “This deal is the next step forward for Office 365 and Dynamics as they connect to the world’s largest and most valuable professional network.”

The LinkedIn transaction is Microsoft’s biggest under Nadella’s watch, and while the companies make a strong case for uniting under the Microsoft banner, the software giant’s checkered past with previous acquisitions raises some concerns.

Microsoft acquired Nokia’s mobile hardware business in 2014 for $7 billion, a move that failed to improve the company’s standings in the smartphone market. In fact, last month, the company announced it was shedding an additional 1,850 jobs after layoffs claimed more than 25,000 mobile phone workers since 2014.

In 2007, seeking to catch up to Google’s online advertising business, Microsoft acquired aQuantive, a digital marketing services company, for $6.3 billion. A few years later, in 2012, Microsoft took a write-down for nearly the entire value of the deal ($6.2 billion) after it failed to achieve the intended result.

eWEEK gathered early reactions from IT analysts and industry watchers about the Microsoft-LinkedIn deal. Their views point to a deal that is rife with both opportunities and pitfalls.

“These records are largely seen as having dated information which is no longer useful for organizations’ ability to maintain customer, employee or prospect relationships,” she told eWEEK. “LinkedIn data has thusly become incredibly valuable to many B2B sales and HR organizations today.”

Although Microsoft “just set a new record for the price of customer data as well as the price for algorithms” by agreeing to pay $26.2 billion, Sussin said Gartner doesn’t consider the figure “too high.” The biggest worry is what Microsoft does with all that data.

” My biggest concern is that if the LinkedIn consumer data is misused, the network will become less frequently used and populated,” said Sussin.

In a research note sent to eWEEK, Dan Bieler, principal analyst at Forrester, echoed similar concerns. “LinkedIn’s status of trusted independent platform for professional information exchange could be undermined,” he stated. “Although the deal, should it go through, helps Microsoft to strengthen its social networking services and professional content, there will be LinkedIn users that are not keen to become sucked into the Microsoft ecosystem as part of their social collaboration activities.”

Bieler also suggested that Microsoft “redouble its mobile efforts,” citing LinkedIn’s large mobile audience. According to LinkedIn, more than 60 percent of its traffic comes from smartphones and tablets.

“Microsoft’s weak position in mobile ecosystems could dramatically undermine LinkedIn’s longer-term opportunities,” Bieler stated. “If Microsoft underestimates the mobile dimension for LinkedIn, the future for LinkedIn could be very questionable. Users are fickle and there is no loyalty to outdated social media platform.”

Patrick Moorhead, principal analyst and founder of Moor Insights & Strategy, described the deal as “yet another Microsoft move to ‘own’ every aspect of business computing and aligns with the Microsoft mission,” in an email sent to eWEEK. Apart from the inevitable Office 365 integrations, LinkedIn can help the software giant fend off a new breed of fast-growing collaboration startups and further expand its reach into the enterprise.

“This could also better help Microsoft compete with up and coming services like Slack,” said Moorhead. “Looking at [LinkedIn], I can see much larger reach potential well beyond 500 [million] users.”