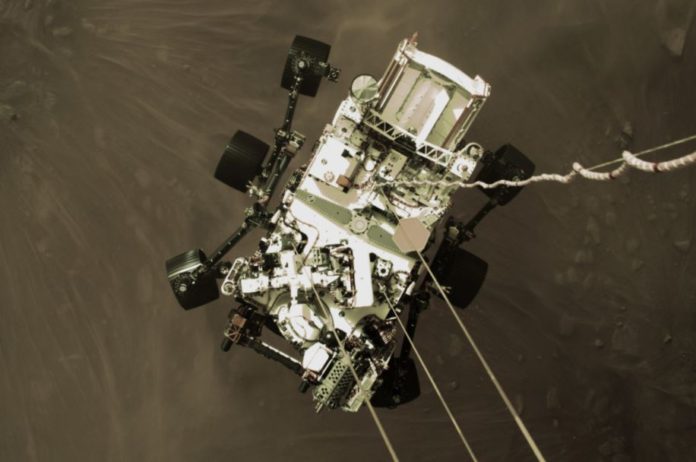 Beginning with the very first images, it was clear that NASA’s Perseverance rover excursion to Mars was a breakthrough. The video’s opening shot of the supersonic parachute, the dropping of the heat shield, the shot of the descent stage and the view of the rover itself, dangling beneath it were riveting. They were unprecedented.

Also unprecedented was the speed at which photos and videos arrived. Previous photos from interplanetary space had always taken hours or days to arrive. When Perseverance landed, the first photos were available in seconds. Images from the first video in a few minutes. When the first videos arrived, they were so good that NASA managers commented during the post-landing news conference that the agency was going to have to start labeling which were real and which were animations.

While Perseverance has yet to begin its trek to the remains of a Martian river delta in search of life, the breakthroughs are continuing. Managers revealed in a statement that the data link between the rover and its relay satellite was operating at 8 megabits per second, nearly the speed of an Ethernet connection. And that was before the high-gain antenna was deployed.

Inside the rover was an off-the-shelf Intel-based computer running Linux. The cameras delivering those magnificent images came from commercial video cameras built by Flir and available to anyone. The only modifications NASA made were to limit the outgassing (the release of gasses from within the device) to protect other components. The microphones that are relaying sounds from the Martian surface are also commercial products.

While Perseverance is a Mars Rover, it hasn’t yet begun to rove. When it does, it will do so as an autonomous vehicle. But it’s already operated as an autonomous spacecraft. The landing sequence was handled by the craft itself. The Perseverance computer controlled the landing, and even used machine vision and radar to choose its own landing spot. NASA officials said at a later conference that it was the most difficult landing ever attempted by a spacecraft, but it allowed the rover to be positioned within five meters of its intended target on a small spot of level ground near the river delta it’s going to explore.

When Perseverance reaches likely-looking spots, it will take samples of soil which scientists hope will show signs of life. Tubes holding those samples will be left behind by the rover for a later mission, in which another rover will pick the sample tubes up, load them into another spacecraft, which will ultimately return the samples to NASA.

Rovers are all about autonomy

Through all of this, a recurring theme is autonomy. Because Mars is too far away to command the rover directly, the best that NASA can do is to tell the rover what it wants it to do, and then let the rover do it. The level of autonomy will allow the rover to accomplish more over time than its predecessors could do.

Of course the rover will do more than drop the occasional sample tube. There’s also Ingenuity, the Mars helicopter. This small drone is currently housed under the rover, where it can be dropped free, and once Perseverance moves out of the way, can explore from the air. Like the rover, the helicopter is an autonomous vehicle that will cover a much larger area than the rover can. It’s unclear how many flights Ingenuity will make, but considering NASA’s luck with spacecraft, it could keep flying for a very long time.

Like Opportunity, the Perseverance rover is nuclear-powered, using electricity generated by the decay of a plutonium power source. Both rovers power systems are rated to operate for a minimum of 14 years. By using the radioisotope thermal generators in the two rovers, the problem of dust that killed two previous rovers is eliminated. Thus it’s likely that both of the most recent rovers will last far longer than 14 years.

So now that we have an autonomous and apparently reliable robot with an aircraft on Mars, what’s next? It’s impossible to know for sure, but it seems probable that given Perseverance’s mission to discover whether life has existed on Mars, we should know the answer to that question by the time the samples are examined, if not sooner.