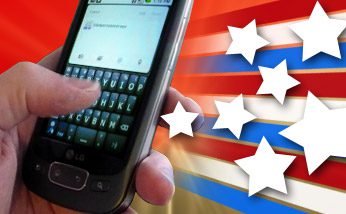 That simple message was then retweeted like wildfire from person to person, with more than 226,000 retweets in the first 22 minutes after it was posted, which breaks the all-time retweet record previously held by teenage singer Justin Bieber, according to a report by BuzzFeed.

By noon EDT Nov. 7, the Obama tweet had been retweeted more than 669,000 times, and the total was still climbing. That could certainly allow him to now add the title of “Tweeter in Chief” to his resume.

A story by MediaBistro was one of the first to crown the Obama message as the most retweeted message in Twitter’s history. The Tweet also included a tender photograph of the president hugging his wife, Michelle.

One minute before that now-famous staff Tweet, Obama himself had also sent a Tweet to his followers, which was identified by his social media signature, “bo,” that designates tweets that are made personally by the president. “We’re all in this together. That’s how we campaigned, and that’s who we are. Thank you. –bo.”

The tweets from Obama and his campaign staff were among more than 31 million election-related tweets made on Election Night 2012, which made it “the most tweeted-about event in U.S. political history,” according to Twitter spokeswoman Rachael Horwitz in a report by Reuters. “Between 6 p.m. and midnight EST, there were more than 23 million tweets,” which broke the previous record of 10 million set during the first presidential debate on Oct. 3, according to Reuters.

Twitter continued to grow into a useful and fascinating role in this Election Night, providing a still-developing forum for candidates, the press, pundits and many others to passionately discuss the night’s event and twists and turns in real time.

“As the results of the election were called by news organizations, the conversation on Twitter surged, hitting a peak of 327,452 Tweets per minute (TPM),” wrote Adam Sharp, head of government, news and social innovation at Twitter in a Nov. 6 post on the official Twitter Blog. “Before President Obama took the stage to address the nation, he shared a special update on Twitter,” sending his thanks to the nation’s voters who re-elected him for a second term.

There were other moments of intense tweeting during the evening, Sharp reported. At 11:19 p.m. ET, when the television networks began declaring the news that Obama had been re-elected, there were about 327,452 TPM recorded, according to Sharp. At 11:12 p.m., when the presidential race in Iowa was decided, 85,273 TPM were recorded. At 9:33 p.m., when the races in Pennsylvania and Wisconsin were decided, there were 69,031 TPM.

“Since the campaign cycle unfolded on Twitter, it’s only fitting that for candidates nationwide, the journey also culminated here,” wrote Sharp. “After the votes were tallied, the candidates came to Twitter to share their final campaign Tweets.”

And, oh, about that sweet photo of Obama hugging his wife, Michelle, which accompanied his campaign’s historic tweet—it’s now being identified as the “most-Liked photo” in the history of fellow social media Website Facebook, according to a Nov. 7 story by The Huffington Post.

“It’s a simple, touching photo, one that Facebook users have Liked a staggering 3.1 million times,” as of 10 a.m. on Nov. 7, the story reported. “Facebook confirmed around 4 a.m. that the snapshot became the social network’s most popular picture by the time it had reached 2.1 million Likes.”

Social media sites like Twitter, Facebook and YouTube brought out other creativity in covering the election, from inside the campaigns of the candidates to outside groups that worked to give the unfolding events new kinds of analyses. One team of researchers “assembled an electoral-vote map based on 30 million geo-coded Tweets that mentioned either Obama or Romney,” according to a story from Slashdot. “As people across America headed into the voting booth, Crowdwire (a project of Bluefin Labs) set up a “Live Social Media Exit Poll” that tried to decode how the election would eventually end.

Twitter, Facebook and YouTube are still infants in the world of social media and in the ways that their participatory opportunities were used by political campaigns and the public in this year’s elections. It will be fascinating to watch how they continue to develop and to see how political campaigns use them even more creatively in the future.