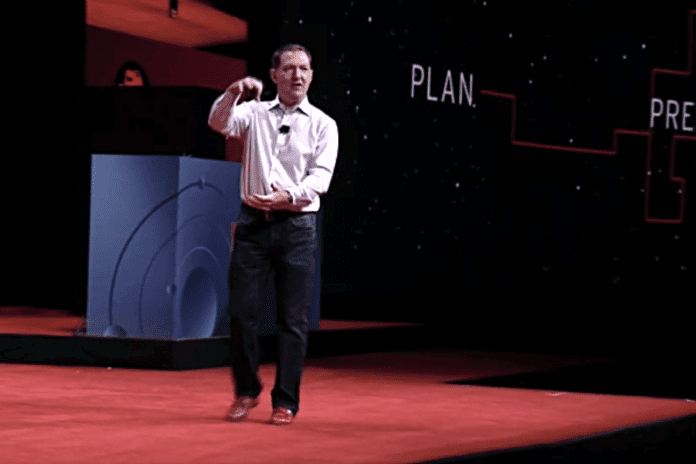 At Red Hat Summit 2018 in San Francisco May 9, Whitehurst returned to that same topic, providing insights into how modern, agile enterprises are enabling both executives and staff to thrive in a world where static corporate planning no longer work. In his view, planning is now being replaced with three core ideas: configuration, enablement and engagement.

“In a world that is less know-able, where we’re solving problems in a more bottom up approach, our ability to effectively plan into the future is much less than it has been in the past,” Whitehurst said during his keynote.

“In a more uncertain, volatile world, where you can be blindsided by orthogonal competitors coming in, you have to recognize that you can’t always plan or know what the future is,” Whitehurst said.

In Whitehurst’s view the old style enterprise planning function can be replaced by configurations.

“You can configure for a constant rate of change without necessarily knowing what the change is,” he said.

The long-established process where executive leadership clearly articulates specific activities employees need to perform to achieve a planning goal, can be replaced by what Whitehurst referred to as a greater degree of enablement. Whitehurst explained that enablement is all about empowering staff with the knowledge and tools to make the right business decisions.

“The idea of execution as compliance can be replaced by a greater level of engagement by people across the organization, to ultimately be able to react at a faster speed to changes that happen, ” Whitehurst said.

Whitehurst said that executive leadership doesn’t always know what changes will occur in a business or market vertical, though it’s certain that some form of change will occur.  He asserted that the modern application development approach of trying, learning and then modifying can be applied to enable a more agile approach to business processes.

Automation has played a key role in IT in the past several years, though it doesn’t necessarily have the same role when it comes to enterprise planning. Whitehurst said that it’s important to make sure that individuals are getting the context, information and tools they need to make decisions rapidly.

“It’s less about automating what people are doing and more about helping to better enable people with tools and technology,” Whitehurst said.

In a world where planning execution no longer works, Whitehurst said that that there is a need for more executive engagement.  Whitehurst said that it’s often a challenge for executive leadership to engage with staff in real-time to make the right decisions and take advantage of opportunities. In Whitehurst’s view IT can and should be used as a mechanism for management to have better engagement with the overall organization.

“IT is now becoming the enabler and driving the pace of change to the business,” he said.