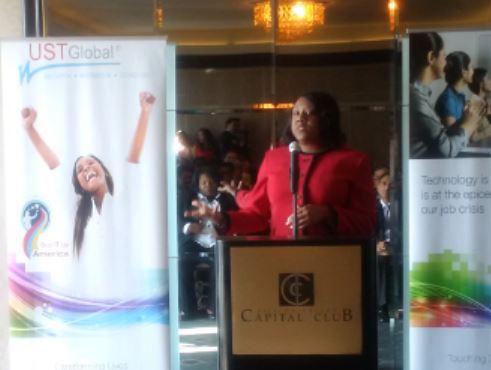 SAN JOSE, Calif. — The conventional path of many IT careers is pretty standard all around the world: Study computer science in high school and/or college, obtain an internship at a tech company, network as hard as you can, and eventually work your way to an IT vendor or the tech department of an enterprise or government agency.

However, the road to a good job in the IT world doesn’t have to follow that well-worn route. There is at least one company in the world that is actually paying qualified students to study IT, so they can get good IT jobs paying — you guessed it — pretty good money.

UST Global, a Southern California-based international consulting firm that specializes in end-to-end digital solutions and IT services for Global 1000 companies, is the company that is taking on this project. On Aug. 20, UST Global launched Step IT Up America San Jose, a proprietary job creation program that is directly addressing the need to train and place minority women into high-quality IT jobs in San Jose and nationwide.

Step IT Up America San Jose is the seventh regional city program started by UST Global in a mere 18 months. The program is focused specifically on minority women; the types of jobs range from call center personnel, to programmers, to IT administrators and other IT-related jobs.

“I’ve had the privilege of speaking to about 60 of the Fortune 500 companies, and there’s not one CIO who’s been able to tell me they have a diverse workforce inside IT,” B.G. Moore, Chief of Staff at UST Global and general manager of the Step IT Up initiative, told eWEEK at the San Jose launch event.

“Our CEO, Sajan Pillai, has been a member of the National STEM (science, technology, engineering, mathematics) Council for the last five years, and he was assigned to be the chairman of the committee [to further] African-American women in technology,” Moore said. “That’s when we started getting statistics that overwhelmed us.

One of the challenges, Moore said, is finding talent for specific types of tech jobs. Step IT Up America’s program lasts 90 days, and it is an intense 90 days; it’s a demanding 8-to-5, Monday-through-Friday curriculum. But when a student completes it, he or she is ready to step right into a specific job.

“Students who commit to this program can’t have a job while they do it,” Moore said. “It’s too demanding. Fifty percent of our students are single mothers, and they need help with the family when they’re in the program.”

UST Global, after vetting all its candidates for the program, will pay all tuition and expense costs for each student, once they are committed to Step IT Up.

Arielle Robinson, a graduate of Step IT Up America’s Chicago program, was a guest of UST Global at the San Jose event. She holds a bachelor’s degree in liberal arts but simply could not find a job anywhere after graduation.

“I’m passionate about psychology, but when I got into the job market, I found that my skills weren’t highly sought after,” Robinson said. “I felt I had made a huge mistake in dealing with my career goals. I did internships, but somewhere I went wrong. I had no job prospects, I was going in the wrong direction.

“I then went to an employment agency in Chicago and saw a job posting with paid training in technology. This looked really good to me; I had people knocking on my door (with bills) and so I took a shot. It’s been a roller coaster ever since. After the training, I flew down to a client site, a telecom, and used my intelligence to do my assignment and create a sense of worth. It’s truly been an amazing journey, and I now have a great job I really like, and wouldn’t have known about it otherwise.”

Step IT Up America’s goal is to give motivated students an opportunity to pursue dynamic and long-term careers in IT. UST Global aims to place 5,000 minority women across the country in STEM-related careers by 2020. Since Step IT Up America’s initial launch, more than 200 women have graduated from the program, with another 100 on track to join them before the year is through.

“Part of the STEM initiative roots from wanting to build the best and most inclusive pool of untapped talent,” San Jose Mayor Sam Liccardo said at the Aug. 20 event. “We’re glad to be combatting this issue right here in San Jose through programs like Step IT Up and the White House TechHire initiative. We look forward to supporting the graduates and what they bring to the workforce.”

“The Bureau of Labor Statistics reports there will be 1.4 million computer science jobs available in the United States come 2020. Yet, the National Center for Women & Information Technology identifies the computing workforce as only 26 percent women. Our mission is to even out these statistics, enabling minority women to pursue life changing careers,” Pillai said.

Through contracts with participating corporations, graduates of Step IT Up America are guaranteed jobs following their completion of the program. Along with their new job titles, graduates also gain salaries above San Jose’s median household income and opportunities for rapid advancement. To date, Step IT Up America has successfully launched in Philadelphia, Atlanta, Detroit, Los Angeles, New York, and Chicago.

Step IT Up America runs parallel to President Obama’s new Startup America initiative, which calls attention to the low numbers of women and minority tech entrepreneurs. More than 30 diverse tech startups recently attended the first-ever White House Demo Day as part of the initiative, which kicked off earlier this month, on Mr. Obama’s 54th birthday on Aug. 4.

Obama’s call to action included new public/private partnerships that promise to provide Americans with the opportunity to “pursue their bold, game-changing ideas.”

“We’ve got to make sure that everybody is getting a fair shot—the next Steve Jobs might be named Stephanie or Esteban. We’ve got to unleash the full potential of every American—not leave more than half the team on the bench,” Obama said.

For more information on how companies can participate in Step IT Up America, go here.