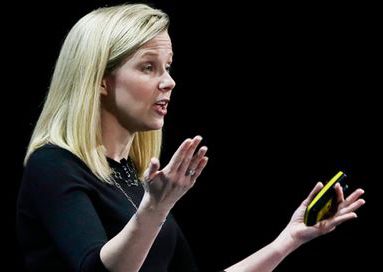 Turns out those were all peanuts compared to Yahoo CEO Marissa Mayer’s soon-to-come $100 million-plus out-the-door prize as reported in a U.S. Securities and Exchange Commission filing earlier this week.

Mayer, who was recruited from Google in summer 2012 to try and straighten out the listing ship that was–and still is–Yahoo, will be awarded a rather comfy amount of money upon her departure, following the impending sale to Verizon Communications. This is despite the fact that nothing she could do was able to save the web services pioneer from sinking beneath the waves of internet advertising competition from companies such as Google and Facebook.

A June 8 vote by Yahoo shareholders will decide whether Yahoo will sell its internet businesses—or basically the whole company–to Verizon for $4.48 billion. Mayer then will step down as chief executive, because there will be no more executive decisions to make. What’s left of Yahoo, which is then going to change its name to Altaba, will exist basically as a holding company for its $30 billion-plus ownership stake in China’s Alibaba e-commerce web giant and a smaller investment in Yahoo Japan.

The Final Compensation Amount is Unknown

Nonetheless, despite her company’s failures, Mayer will be well compensated, the amount of which isn’t exactly known. The Wall Street Journal calculated the final take as being around $187 million, based on the current price of Yahoo stock. The New York Times came up with $186 million, based on the April 24 stock price of $48.15.

The San Jose Mercury News has her cleaning out the office for a mere $112 million. But what’s a few extra million dollars here and there, anyway?

Mayer’s compensation, which will be fully vested at the time of the June 8 vote, does not include her salary and bonuses over the past five years, or the value of other stock that she previously sold. In total, her five-year time at Yahoo will have netted her more than $200 million, according to The Times’ calculations based on company filings.

Back on March 13, the exact amount of her sendoff compensation, included in a March 13 SEC Schedule A proxy statement, was listed as $23,011,325; see Page 112 of the affidavit. That figure is now obsolete.

Back in March, Mayer chose to not accept a bonus check–possibly as much as $2 million–and a potentially lucrative stock award because the company determined her supervision of two major security breaches in the last three years was faulty. To her credit, she asked to have the bonus distributed among Yahoo employees.

The internal Yahoo investigation concluded that her management team reacted too slowly to the first breach discovered in 2014.

The internal report didn’t identify any negligent executives by name, but it blasted the company’s legal department for not looking more deeply into the 2014 breach. Due to that, the event “was not properly investigated and analyzed at the time,” the report said.

“However, I am the CEO of the company and since this incident happened during my tenure, I have agreed to forgo my annual bonus and my annual equity grant,” Mayer wrote.

Truth be told, the security issues of the last three years merely hastened the demise of Yahoo, which had been fading from relevancy ever since Google took charge of the search engine market around 2002.