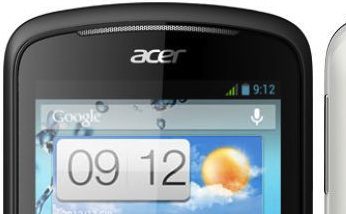 Acer is hoping to draw some notice to its latest smartphones, the Liquid E1 and the Liquid Z2 Android-based handsets, before the yearly mobile industry juggernaut that is Mobile World Congress (MWC) in Barcelona, Spain (Feb. 25 to 28), drives the competition for attention to “Hunger Games”-style intensity.

Other features include a zero-shutter-delay camera, which captures images momentarily and snaps fast-action sequences with 4-, 8- and 16-burst shooting. An integrated Moodagent feature creates music playlists based on an individual’s mood or uses songs from the library to create playlists that match a person’s mood and taste in music. Users can also stream music from their PCs through AcerCloud, a file-sharing and media management solution that lets them retrieve and share multimedia and data files using a variety of computing devices.

The entry-level Liquid Z2 features a quick-mode navigation tool, a 1GHz processor and runs Android 4.1 Jelly Bean with a 3.5-in. display. Other features include a 3MP or 5MP camera that launches in just 1 second, panoramic and multi-angle modes, and continuous shooting (up to 99 shots). The speakers are also equipped with Sound Retrieval System (SRS) technology, which is designed to deliver greater clarity and deeper bass.

Targeted at feature phone upgraders, first-time and multimedia users, the handsets sport a new industrial design in Pearl White and Carbon Black and dual SIM cards, and will initially be available in France, Belgium, the Netherlands and the Ukraine, followed by Russia, the U.K. and Italy, though specific dates were not set.

Acer’s goal to break more successfully into the smartphone market includes efforts to gain a foothold as a low-cost smartphone provider in emerging markets like China, where the high cost of premium handsets like Apple’s iPhone 5 leaves a large segment of the population that wants features like Web connectivity and productivity applications but can’t afford more sophisticated hardware.

At the same time, the company is facing falling sales of its notebook PCs. The world’s fourth-largest PC vendor is grappling with shifting consumer interests, as mobile devices like smartphones and tablets become increasingly popular and users reconsider replacing a desktop or notebook PC with one of these devices.