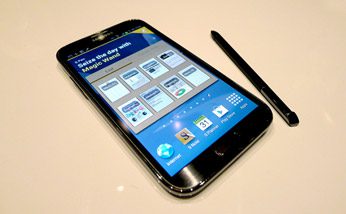 Apple has dominated the tablet market since the iPad reimagined and reinvigorated it. But as competitors find their footing with more compelling devices, Apple’s position at the top is being shaken. During the third quarter, it came the closest it ever has to losing the majority share of the market, with its percentage slipping to 50.4 percent, from 60 percent a year ago, IDC said in a Nov. 5 report.

Samsung made good use of second and third quarters during which Apple fans are thought to have put off sales in anticipation of an upcoming iPad Mini, and consequently was able to increase shipments by 325 percent between the third quarters of 2011 and 2012, with strong sales of its Galaxy Note 10.1 and Galaxy Tab.

“[Samsung] offers a wide range of tablet offerings across multiple screen sizes and colors, and that clearly resonated with more buyers this quarter,” Ryan Reith, program manager of IDC’s Mobile Device Trackers, said in the report. “Its growth to 18.4 percent of worldwide market share during the quarter represents the first time a competitor has attained this level of share since the original launch of the iPad.”

Apple on Oct. 23 introduced a fourth-generation iPad and the anticipated Mini—which features a 7.9-inch display to the traditional iPad’s 9.7 inches—and on Nov. 5 announced that it had sold a combined 3 million iPads in the three days after the two new devices went on sale.

IDC, anticipating strong iPad sales, expects Apple to boost its sales during the fourth quarter, but added that a door has been opened that Apple won’t be able to fully close.

“Now that the new Mini, and a fourth-generation full-sized iPad, are both shipping, we expect Apple to have a very good quarter,” Tom Mainelli, IDC research director, said in the report. “However, we believe the Mini’s relatively high $329 starting price leaves plenty of room for Android vendors to build upon the success they achieved in the third quarter.”

IDC’s Reith added that new Windows 8 and Windows RT tablets—most notably the Microsoft Surface—will also put some pressure on Apple. But again, pricing is a key factor and, in the instance of Microsoft, is one that will work to Apple’s advantage.

“Price points are critical in tablets, as Microsoft and its partners will have a tough time winning a share of consumer wallet with price points starting at $500,” said Reith.

Lenovo finished fifth, with shipments of 400,000 tablets for a 1.4 percent share, mostly helped by sales from China, said IDC.