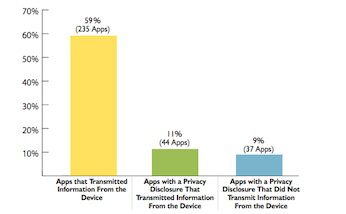 A majority of seemingly kid-friendly apps in the Google Play store and Apple App Store aren’t playing nice, according to a new survey of youth-oriented apps performed by the Federal Trade Commission.

The FTC examined 400 of the most popular children’s apps in the two online stores and found the majority to be collecting information from devices, not disclosing their privacy practices to parents and being unclear about the type of content included in the app.

“Most apps failed to provide any information about the data collected through the app, let alone the type of data collected, the purpose of the collection and who would obtain access to the data,” said the report. “Even more troubling, the results showed that many of the apps shared certain information—such as device ID, geo-location or phone number—with third parties without disclosing that fact to parents.”

Also troubling, it continued, was that “a number of apps contained interactive features—such as advertising, the ability to make in-app purchases, and links to social media—without disclosing these features to parents prior to download.”

Of the 400 apps surveyed, nearly 60 percent were found to be transmitting information from the device to the app developer or, more often, an advertising or analytics company. As a majority of the apps were offering information, but only to a small number of third parties, the FTC concluded that these third parties “would potentially develop detailed profiles of the children based on their behavior in different apps.”

While 15 percent of apps disclosed ahead of being downloaded that they included advertising, 58 percent were found to have ads within the apps. Similarly, 22 percent of apps contained links to social networks, while only 9 percent disclosed that fact.

Apps in both stores provided “certain indicators” when they included the capability to make in-app purchases, which ranged from $0.99 to $29.99, but the FTC found the indicators to be “not always prominent and, even if noticed, could be difficult for many parents to understand.”

“The results of the survey are disappointing … ” said the report. “It is clear that more needs to be done to provide parents with greater transparency in the mobile app marketplace.”

The FTC is recommending that the industry incorporate privacy protections in the design of mobile products and services; offer parents easy-to-understand choices about data that might be shared; and provide more transparency into how data is collected, used and shared.

“While we think most companies have the best intentions when it comes to protecting kids’ privacy, we haven’t seen any progress when it comes to making sure parents have the information they need to make informed choices about apps for their kids,” FTC Chairman Jon Leibowitz said in a statement.

Leibowitz added that the FTC will study the matter again soon, “and we expect to see improvement.”

Amazon.com, which has its own store for apps and other content, recently introduced a FreeTime Unlimited service, understanding that kids are now a major tablet-using audience. The service offers unlimited content for children aged 3 through 8 for $2.99 a month, per child, for Amazon Prime members and $4.99 a month for nonmembers. A $9.99 plan per family is also an option.

All the content, Amazon made clear, has been prescreened for age-appropriateness and all ads and social media components have been removed.