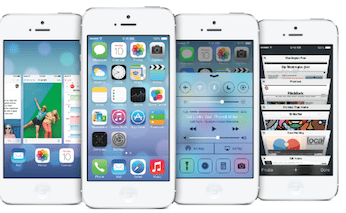 Apple kicked off its 2013 World Worldwide Developer Conference (WWDC) at the San Francisco Moscone West conference center June 10 with, as the rumor mills had long foretold, the introduction of a streaming music service.

Apple followers have been expecting such a service since the company purchased streaming site Lala back in 2009. And Apple couldn’t have kept its users waiting longer for it.

The Pandora-like iTunes Radio is built into the iMusic app in iOS 7. Apple has created featured stations, though users can also create their own. Users can also tap on a station to share it with a friend, or create stations based on an artist or song.

While it’s built into iOS 7—which is available in Beta to developers today and to the rest of us “this fall”—it’s also built into iTunes on Macs, PCs and Apple TV. A version with ads will be free, and an ad-free version will be available to iTunes Match subscribers.

Apple will release iTunes Radio in the United States first and then roll it out worldwide.

“This is the best music player we’ve ever done,” said Cue.

In the 110 minutes before CEO Tim Cook and his staff got around to iTunes Radio, statistics were shared—the iTunes store has 900,000 apps; Apple has paid out $10 billion to developers—and other detail-rich product introductions made.

They look a lot like the current models but are 45 percent faster, featuring fourth-generation Intel Core i5 and i7 processors, 802.11ac WiFi and entirely flash storage.

More dramatically, the Mac Pro was reimagined, inside and out. At a glance, it could be a shiny, thick, black vase.

“With the latest Xeon processors, dual FirePro CPUs, ECC memory, PCIe-based flash and Thunderbolt 2, all build around a revolutionary thermal core, the next-generation Mac Pro is the most radical Mac yet,” Philip Schiller, Apple’s senior vice president of worldwide marketing, said in statement.

The new Mac Pro is 9.9 inches tall, takes up one-eighth the volume of its predecessor but is 2.5 times as fast, and is made in the United States.

It’s the first to come with dual workstation CPUs and connect to multiple 4K (or ultra-high-definition) displays.

Apple didn’t share pricing or exact availability, saying only that it will arrive “later this year.”

Apple ditched its big cats and took its naming convention in a new direction. It named its newest OS “Mavericks,” after the insane surfing spot in its backyard, said Craig Federighi, Apple’s senior vice president of software. Mavericks is the first of what should be several California-themed releases, named after inspiring spots.

OS X Mavericks boasts more than 200 new features. It brings in mapping technologies from iOS, so you can plan a trip and then send it to an iPhone, and also integrates Maps into the Mail, Contacts and Calendar apps so, for example, the Calendar can consider travel time between appointments.

Mavericks also includes what Apple calls “power-user features” such as tags, to help you organize files on your Mac and in iCloud, and Finder Tabs that work to reduce clutter by consolidating multiple Finder windows into a single window with multiple tabs.

Mavericks also includes iCloud Keychain—a way to store Website log-ins and passwords, as well as WiFi passwords and credit card numbers. These are protected with AES-256 encryption, on your hardware and when it’s being pushed between devices.

It also has improvements to Notifications and the Calendar, as well as an Xcode 5 tool for developers, enabling them to measure “every aspect of app performance and energy use,” says Apple.

Apple iOS 7, but No iPhone—Yet

In addition to iTunes Radio, the world was very much expecting an iOS 7 redesign and overhaul—and got it.

Apple overhauled the look of iOS 7, simplifying, streamlining and modernizing it, from the tiny details, like changes to fonts and typography, to larger changes like icon redesigns and a change to simpler, flatter backgrounds.

Pointing out that the faux fine Corinthian leather look to Apple’s iCalender had been removed, Federighi said, “No virtual cows were harmed in the creation of this user interface.”

It has “improved multitasking,” per Apple, though really an entirely new form of multitasking that shows stacked transparencies or, in another view, “cards” that show what open apps look like in real time, not just icons of the apps that are open.

There are also improvements to Photos—you can share photo streams with friends now, Instagram style—as well as to the Control Center, Notification Center and Siri, which will be able to control the device (you can say, “Play my last voicemail,” for instance) and will come in the option of a man’s voice.

It also has a WiFi-based feature called AirDrop, for sharing files with friends right around you.

“No need to run around the room bumping your phone,” said Federighi, taking a dig at Samsung’s S Beam feature, which requires users to touch their phones to share information.

Federighi called iOS 7 the “most significant iOS update since the original iPhone,” and Cook said it represented “an important new direction, and in many ways a new beginning.”

Somewhere in the two-hour whirlwind Apple also announced that its iBookstore will be available on OS X and introduced iWork for iCloud, a way to create documents in a browser, on a Mac or PC, that can be shared with an iPhone. This feature is available in Beta form in iCloud, as of June 10.

Federighi said that installing iO7 on a current iPhone will make users feel like they have an entirely new phone, “but one you already know how to use.”

Analyst Avi Greengart, with Current Analysis, says this is just the right message.

“All the improvement to the user interface adds up to a much better experience—particularly Multitasking and Control Center—but the core navigation constructs … haven’t changed,” Greengart told eWEEK. “That means it will still feel familiar to hundreds of millions of users and there should not be much of a learning curve.”

Ovum analyst Jan Dawson, however, said the nearly unrecognizable new version will be “polarizing” to some users.

“Some people will love that their phone feels new and different, while others will be disoriented by the newness,” Dawson said in a June 10 research note sent out after the keynote.

One detail from the morning that did disappoint—some of us, anyway—was the news that iOS 7 will arrive this fall.

There has been endless talk in the mobile community about how Apple will introduce the next iPhone this summer, so as not to repeat last year’s experience of having Samsung sell tens of millions of Galaxy S smartphones through the long summer months, while iPhone users with any sense of newness long gone, either sat around frustrated or made the switch.

“I think Apple is willing to tolerate Samsung getting the glory this summer. Apple is content to patiently wait until demand reaches a fever pitch for the new iPhone and then reap the benefits of stirring its loyal customer base into a frenzy,” Technology Business Research analyst Jack Narcotta told eWEEK.

“Taking the time this summer to get iOS 7 really humming along and amplifying the iOS experience—not just the hardware or apps—is of paramount importance to Apple,” Narcotta added. “A great, flawless experience keeps existing customers loyal and entices a new wave of users into the Apple ecosystem.”