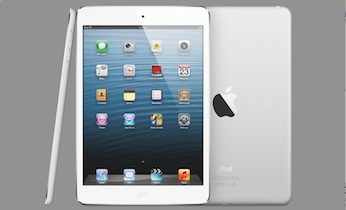 The Apple iPad Mini goes on sale Nov. 2, and the early reviews are out. In short—which the Mini is, compared with the iPad, as well as thinner, narrower and lighter—everyone likes it. A lot. During Apple’s Oct. 23 introduction of the device, Phil Schiller, Apple’s head of marketing, called it “incredibly thin and beautiful” and not just a “shrunken-down iPad.” Apple design guru Jony Ive described it as a “concentration of, not a reduction of, the original.”

To varying degrees, reviewers were left to figure out how to fill whole pages saying the same thing.

“The Mini gives you all the iPad goodness in a more manageable size, and it’s awesome. You could argue that the iPad Mini is what the iPad always wanted to be,” wrote The New York Times’ David Pogue, who, noting a bombardment of tech news in the last week, made the Mini share a column with the Barnes & Noble’s Nook HD and Microsoft’s Windows Phone 8.

Walt Mossberg, keeping his attention to the one device, wrote in The Wall Street Journal, “If you love the iPad, or want one, but just found it too large or heavy, the iPad Mini is the perfect solution.”

Engadget’s Tim Stevens, in a far lengthier and more detailed review, nonetheless similarly concluded: “Its cost is compelling, its design is superb and it of course gives access to the best selection of tablet-optimized apps on the market. To consider it just a cheap, tiny iPad is a disservice. This is, simply, a great tablet.”

Most frank of all was Bloomberg’s Rich Jaroslovsky. “It’s an iPad, only … smaller. Beyond that, there may not be much more to say about the latest addition to Apple’s tablet family. But I’ll think of something.”

What Jaroslovsky, like several others, finally did find to write about—beyond repeating the tablet’s specifications and finding synonyms for love—is the Mini’s display.

The iPad 3 with Retina display, when it launched, was described as offering an experience akin to putting on a new pair of glasses with an increased prescription—suddenly the world, which had been perfectly nice a moment ago, was extra crisp, brighter, all the colors more saturated and rich. The Mini features a display that’s a smaller version (7.9 inches on the diagonal, versus the iPad’s 9.7 inches) of the display on the iPad 2, which makes it something like reverting to the old glasses: a perfectly nice experience, marred by the knowledge that the world could be crisper and brighter and richer.

The most notable thing about the Mini, wrote Jaroslovsky, “is the quality of the display, which can be best described as adequate.”

Again, when it comes to the Mini, this is what serves for criticism.

“Nobody’s going to complain about the sharpness—it packs in 163 pixels per inch (ppi)—but it’s not the same jaw-dropping resolution as the big iPad (264ppi),” wrote Pogue. “Gotta hold something back for next year’s model, right?”

Stevens, looking harder, discovered that the magnetic SmartCover for the Mini—which is obviously smaller than the covers for the larger iPads but still costs $39—doesn’t snap into place with the accuracy of the larger models.

“It requires a little more precision. Hardly a deal breaker (how often are you removing your Smart Cover?) but a bit of an annoyance,” he said.

Perhaps the harshest criticism levied is one that Apple would rather happily receive.

On The Verge, Joshua Topolsky, after complimenting the OS and writing that the Mini is “absolutely gorgeous to see, and in your hand has the reassuring solidness of a product that’s built to last,” noted the profile feels “… extremely lean. Sometimes too lean.”

He continued, “Maybe it’s just my big hands, but I wanted a little more to grab onto. In that regard, I prefer the feel of the Nexus 7.”

And so it remains, only women can never be too thin or too rich.