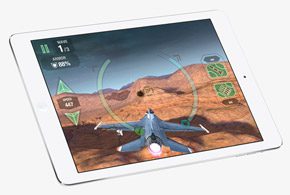 The rumor mills surrounding Apple already have been busy with reports of new iPhone 6 devices and expected iWatches from the Cupertino, Calif.-based company. Now there’s another Apple product rumor, this one suggesting a 12.9-inch iPad, which would be the largest version built so far, that could be released in early 2015.

Also surfacing are online images that purportedly show evidence that Apple intends to release its new iPhone 6 models on Sept. 9, a date that has come up before in rumors surrounding the product’s launch.

The larger iPad rumor surfaced in an Aug. 27 story by Bloomberg about how Apple parts and component suppliers are gearing up to assemble the larger devices in production starting in the first quarter of 2015. The report was based on talks with unnamed people involved in the manufacturing process.

“The new iPad will have a screen measuring 12.9 inches diagonally, said the people, who asked not to be identified because the details aren’t public,” the story reported. Apple has “been working with suppliers for at least a year to develop a new range of larger touch-screen devices, said the people.”

Today’s iPads come in a regular 9.7-inch screen size and in an iPad mini with a 7.9-inch screen.

Tablet sales have been slowing around the globe in 2014, with worldwide tablet shipments down nearly 36 percent in the first quarter of 2014, compared with the fourth holiday-benefiting quarter of 2013, according to an earlier eWEEK report. Those figures, from research firm IDC, said that tablet sales for the first quarter grew just 4 percent over the same period in 2013. The slowdown was felt across screen sizes and operating systems, according to the company.

Apple could be trying to offer a new larger iPad to boost sales in the tablet marketplace.

An email inquiry from eWEEK about the rumors of a larger iPad was not immediately answered by Apple.

The two purported iPhone 6 images showing the Sept. 9 launch date for the devices were leaked by a French Website, nowhereelse.fr, in a report that claims that they are evidence that the announcement will occur on that date, according to an Aug. 27 story in London’s The Independent.

“The launch date for the iPhone 6 in the UK and the rest of the world looks more and more certain to be 9 September, after a French Website that correctly leaked the 5s posted photos of promotional art bearing it,” The Independent reported. “Editor of nowhereelse.fr Steve Hemmerstoffer uploaded the image on Monday, which shows the date on the display of the iPhone 6 blueprint along with other (not particularly telling) features like the volume buttons and Lightning connector.”

The images were provided to Hemmerstoffer by his “most trusted and loyal Chinese sources,” he told the paper.

It’s certainly been a busy few days and weeks for Apple product rumors.

The Sept. 9 date for Apple announcements has even been mentioned as a possible launch date for Apple’s long-rumored iWatch, according to a recent eWEEK report. In fact, though, no one is really sure when the smartwatch will actually be introduced by the company, or when it will be available for sale in the United States and around the world. The latest rumors call for a possible announcement on Sept. 9 at an Apple event that the company isn’t even confirming at this point. That event has also been repeatedly rumored to be the launch event for the upcoming iPhone 6.

An eWEEK report on the coming iWatch back in June said it will likely include a display that measures 2.5 inches on the diagonal and is nearly square, and that Apple expects to ship 50 million units in the first year of the device’s release.