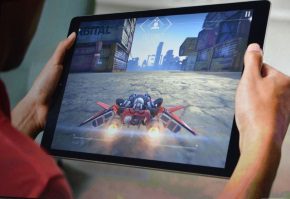 The latest Apple tablet, the iPad Pro, will be available for online ordering starting Nov. 11 and will be in Apple and other select stores later in the week for buyers who want to get their hands on the new device.

The iPad Pro, which was announced by the company at its Sept. 9 product launch event, is an enterprise-aimed machine featuring a 12.9-inch diagonal Retina display made up of 5.6 million pixels, which is more pixels than a 15-inch MacBook Pro with Retina display. The iPad Pro, which runs the latest iOS 9 operating system, also includes Apple’s third-generation 64-bit A9X chip, which has two times the memory bandwidth of previous versions.

Two optional accessories—a $169 snap-on physical “Smart Keyboard” for users who desire the feel of real keys and the new $99 Apple Pencil, which allows users to “draw” on the iPad with a stylus for accurate inputs—will also be available for online ordering on Nov. 11, the company said in a Nov. 9 announcement.

“The early response to iPad Pro from app developers and our customers has been incredible, and we’re excited to get iPad Pro into the hands of customers around the world this week,” Philip Schiller, Apple’s senior vice president of worldwide marketing, said in a statement. “iPad Pro is the most powerful iPad we’ve ever made, giving users the ability to be even more creative and more productive with the epic 12.9-inch Retina display, powerful 64-bit A9X chip and groundbreaking Apple Pencil and new Smart Keyboard. We can’t wait to see what they do with iPad Pro.”

The iPad Pro is Apple’s largest-ever iPad model. The iPad Air and Air 2 have 9.7-inch displays, while the iPad mini 4 and iPad mini 2 have 7.9-inch displays.

Samsung also recently joined the large-screen tablet wars with its consumer-focused Galaxy View tablet, which sports an 18.4 -inch Full HD display that the company hopes will create a new home entertainment niche for a large, mobile device. The Galaxy View tablet includes a kickstand for easy viewing and a host of preloaded streaming content sources where users can view movies and television shows on the fly, according to an earlier eWEEK report.

The Galaxy View features a video-optimized user interface on its touch-screen display, where consumers can choose between content offered by YouTube, Netflix, Hulu, CBS and other video content providers, according to the company. The machine retails for $599.99 and features a 1.6GHz octa-core Exynos 7580 processor, 2GB of memory, 32GB of built-in storage, a microSD slot that accepts storage cards up to 128GB, stereo speakers and a 2.1-megapixel camera.

The machine, which runs on the Android 5.1 operating system, also includes 4G LTE and WiFi capabilities, as well as a SIM card slot so users can bring movies with them when traveling. The tablet’s 5,700mAh Li-Ion battery provides up to about 8 hours of video viewing or up to about 299 hours of music playing and Internet use.