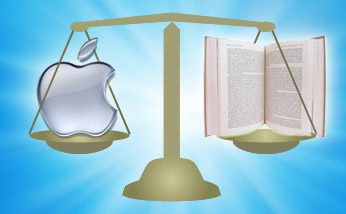 Apple’s lawyers, in court this week, are portraying Apple and five U.S. publishing giants as being very much at odds over the pricing of ebooks.

The Department of Justice (DOJ), which brought an antitrust case against Apple last year, is determined to prove that Apple, before entering the ebook market in 2010 with the introduction of the iPad, colluded with the publishers to raise ebook prices.

Penguin Group CEO David Shanks, the first publishing executive to take the stand, said on June 4 that far from conspiring, Penguin and Apple “clashed on many things,” the Wall Street Journal reported June 4.

According to the report, Shank said that Penguin initially proposed a deal in which Apple would determine the prices of ebooks—a wholesale pricing model—but that Apple preferred what it called an “agency model,” in which the publisher set the price and Apple took a 30 percent cut on each sale.

Shank said that he did seek assurances from Apple that Penguin’s competitors were agreeing to the same terms, not to fix prices but out of fear of being the only publisher agreeing to the agency model.

“I did not get the deal I wanted, but I wanted to be sold to Apple’s customers,” Shank testified, according to the report.

Simon & Schuster CEO Carolyn K. Reidy took the stand June 5. In proving that friction existed between her company and Apple, Reidy seemed to make easy work for Apple’s lawyers. In an email to her boss, Reidy called the Apple ebook executive she was dealing with a “minion,” and was so incredulous that Apple’s 30 percent cut was standard that she called an executive at Paramount Pictures to verify it, The New York Times reported.

Whether or not there was tension in their negotiations with Apple, the publishers had motivation to eventually sign on with Apple. They were all frustrated by the practices of online retailer Amazon. They particularly felt stymied about how to sell a new hardcover, for $28 or so, when Amazon would sell the same book in ebook form for $9.99. Privately or publically, they struggled with whether to hold back ebook releases until several months after the hardcover debut—a process referred to as “windowing.”

“Amazon is definitely not liked much because of selling below cost for [New York Times] Best Sellers,” Apple executive Eddy Cue wrote in a Dec. 15, 2009, email to Steve Jobs, Apple’s CEO at the time. That email and others are included in the DOJ’s opening statement materials.

In the same email, Cue told Jobs, “Everyone was ecstatic to see Apple and what it could mean for their industry.”

DOJ attorney Lawrence Buterman questioned Reidy about calls between herself and her counterparts at rival publishers, though she said “she did not remember all of the calls,” the Times reported.

Reidy was also asked about the Most Favored Nation (MFN) clause in the Apple contract, stating that no retailers the publishers sold to could sell ebooks for a lower price.

Reidy said that while she initially opposed the MFN, she eventually agreed to it. “The MFN made Simon & Schuster want to move other retailers to an agency model,” she said. “It didn’t force us.”

Simon & Schuster, Penguin, HarperCollins, Macmillan and Hachette all settled antitrust claims with the DOJ. Apple CEO Tim Cook has insisted that Apple did nothing wrong and so wouldn’t admit saying that it did.

“We’re going to fight,” he said, referring to the trial at a tech conference May 28.