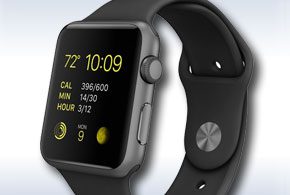 Apple Watch shipments are predicted to drop by some 25 percent in 2016, fueled by shortcomings in the product’s app ecosystem, its reliance on an accompanying iPhone and the still-fledgling nature of the wearable device market, according to a recent analyst report.

The investment note, by KGI Securities analyst Ming-Chi Kuo, estimates that Apple sold about 10.6 million Apple Watches (pictured) in eight months of sales in 2015 and expects shipments of only 7.5 million devices in the full 12 months of 2016, according to an April 11 story by 9to5mac, which saw a copy of the investment note.

In his report, Kuo says his expectation of a drop in Apple Watch shipments is based on several factors, including a lack of killer apps for users, as well as limited battery life and the watch’s need to work alongside an iPhone, the story reported. Also cited as a negative that will contribute to shipment drops is the need for improvements in its form factor, he wrote.

“KGI expects mass-production of the next Apple Watch to begin in the third quarter of this year, suggesting a likely launch alongside the iPhone 7, with better connectivity among the improvements,” the story reported. “However, KGI believes this will effectively be an ‘S model’ refresh, with little change to the form factor.”

The investment note predicts that “demand may improve on the back of a new design in 2017,” according to the story.

In January, a Juniper Research report found that the Apple Watch quickly captured 52 percent of the global smartwatch market in 2015, even though the first Apple Watches didn’t go on sale until April of 2015. The popularity of the Apple Watch eclipsed the shipments of competing products from rival companies in less than a year, according to an earlier eWEEK report. In comparison, smartwatches running Android Wear made up less than 10 percent of sales in 2015.

At that time, the lack of a strong use case for smartwatches caused consumer sales to lag, the report stated.

Since its release in April 2015, the Apple Watch has already received an updated operating system, watchOS 2, which delivers a wide range of new features and options as well as new tools to allow developers to add more future functions. The updated watchOS 2 software gives developers the ability to build faster, more powerful apps running natively on the Apple Watch, while also offering new watch faces and new communications capabilities in the device’s Mail, Friends and Digital Touch apps.

Reports late last year said Apple is working on a second-generation Apple Watch 2 smartwatch, but the rumored devices have yet to show up. Among the rumors for a Apple Watch 2 are a built-in FaceTime video camera and more independence from accompanying iPhones. The reports focused on an HD video camera being integrated into the front of the watch, as well as the ability for wearers to receive and send texts, emails or app updates without having to be tethered to an accompanying iPhone, as the original watch requires. The front video camera would allow Watch wearers to video conference with other users.

The increased iPhone independence would be made possible due to a new WiFi-enabled chipset, which would also offer a “find my watch” feature. Apple also is likely working on power and battery tweaks so that new features don’t cause the existing battery pack to run down more quickly.

First-generation Apple Watches start at $349 for the Apple Watch Sport version. The standard Apple Watch starts at $549 for a 38mm-wide version or $599 for a 42mm-wide model. Prices for the 38mm version can rise to $1,049, while prices for the 42mm model can go up to $1,099, depending on the watchband selected. The regular Apple Watch can be purchased with a fluoroelastomer band or one of three different leather bands.