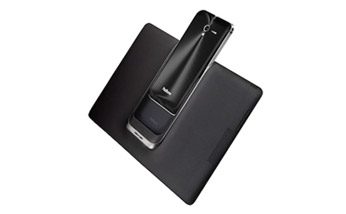 Asus and HTC have introduced new smartphones that show what it takes to get noticed in a market dominated by Samsung and Apple. Neither smartphone—in fairness, the HTC may be better described as a phablet—was introduced immediately for the U.S. market, but there’s hope.

From Milan, Asus introduced the PadFone 2, which consists of a thin and light Android-running smartphone with a 4.7-inch display that slides into a 10.1-inch tablet that can be docked to a keyboard.

The “It’s Intuitive!” tag line, also accompanying the phone on the Asus Website, seems to refer to the fluid dialogue that takes place between the phone and tablet components. Apps, says Asus, are “seamlessly optimized on-the-fly to support both tablet and phone modes, with an instant transition between smartphone and tablet screen sizes.”

There’s also no need to sync data between the two, as the PadFone 2 Station uses the PadFone 2 storage when the two are connected, and the pair—Long Term Evoloution- (LTE-) enabled—rely on a single data plan.
The PadFone 2 runs a Qualcomm Snapdragon S4 1.5GHz quad-core processor and Android 4.0.3 (Ice Cream Sandwich). It measures 137.9 by 68.9 by 9mm and weighs 135 grams. For context, the Samsung Galaxy S III, with its 4.8-inch display, measures 136.6 by 70.6 by 8.6mm and weighs 133 grams.

The PadFone Station weighs 514 grams, for a total of 649 grams. (The newest Apple iPad weighs 652 grams.) Both the smartphone and tablet feature Super IPS+ technology with a capacitive touch-panel and scratch-resistant Corning Gorilla Glass HCLR film.

And there are still other very notable elements. The camera has 13 megapixels, an f/2.4 aperture and can take 100 shots at six shots per second—while recording 1080p high-definition video at 30 frames per second (fps) or 720p HD video at 60fps.

The sound quality is enhanced by technology and audio tuning by Waves—whose technology has won it a Technical Grammy award.

The PadFone 2 also features a SuperNote app that translates handwritten text to editable text as well as translates words, phrases and sentences into a chosen language with just a touch, instead of the need for a third-party app.

Asus has said it will launch the PadFone 2 before the end of December in parts of Europe and Asia, and availability in other countries will be announced later.

As for the HTC phablet, it’s called the J Butterfly, and for now is available in Japan only, through carrier KDDI. (“We should expect to see it everywhere,” writes a confident HTCpedia. “It may not have the same name, but it is coming.)

The J Butterfly runs Android 4.1 (Jelly Bean), incorporates a 1.5GHz quad-core Snapdragon S4 processor, and has an 8-megapixel rear camera that can shoot 1080p video and a 2.1-megapixel camera up front.

The big deal is that this is a big phone—it features a 5-inch display that’s the first with a 440ppi full-HD Super LCD 3. The Samsung Galaxy Note 2, with its 5.5-inch display, as HTCpedia points out, features a Super AMOLED (active-matrix organic LED) at 267ppi.

The Note 2 also makes for a good foil when it comes to size, weight and battery performance. The J Butterfly weighs 140 grams to the Galaxy Note 2’s 183 grams, and measures 9mm thick to the latter’s 9.4mm width. The Note pulls ahead with its battery, a 3,100mAh—offering 25 percent more use time than the previous Note—to the J Butterfly’s 2,020mAh.

But then the HTC pulls out the final punch: The J Butterfly is waterproof.