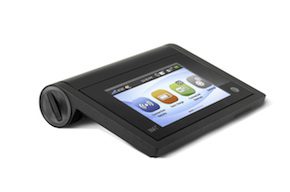 AT&T and Novatel Wireless have introduced the MiFi Liberate, the first mobile hotspot with a touch-screen.

Given the Liberate’s name, it’s unclear exactly what users are being freed from—slow speeds? Lame battery life? Tricky usage? The Novatel hotspot addresses these issues and others. It runs on AT&T’s Long Term Evolution (LTE) 4G network, can run for up to 11 hours of continuous usage, and can connect up to 10 WiFi-enabled devices.

From its 2.8-inch color touch-screen, users can view their data usage, manage connected devices, and adjust network and device settings. Ideal for travel, it can also enable users to connect in more than 200 countries, making it simple to send emails, upload photos or simply keep one’s nose to the grindstone while abroad, without accruing unexpected fees.

Another perk: The Liberate has a microSD card slot, so files can be saved to the MiFi and accessed by WiFi- and DLNA-capable (Digital Living Network Alliance) devices, which include smartphones, printers, televisions and cameras.

“We are committed to delivering wireless solutions that empower our customers and make their lives easier,” Jeff Bradley, AT&T’s senior vice president, said in a Sept. 27 statement.

While announcing it will exclusively offer the MiFi Liberate, AT&T held back on sharing pricing or availability details. A spokesperson said to expect it “in the coming months.”

In August, AT&T followed Verizon Wireless’ lead and began offering subscribers shared data plans that center on a data allotment, instead of a single device. The plans are intended to encourage consumers—or, in a more generous light, facilitate their desire—to have more devices connected to a high-speed wireless network.

“We knew people would [make the switch], but really what made the plan very accretive to us was for them to attach more devices,” Shammo told Goldman Sachs analyst Jason Armstrong. “What we are seeing is people are attaching more than we expected.”

During the second quarter, global shipments of smartphones, tablets and PCs—collectively known as smart connected devices—exceeded 267 million units, according to research firm IDC. By year’s end, IDC expects that figure to reach 1.2 billion units and to grow to 1.4 billion in 2013.

While smartphones make up the bulk of those figures, tablets, said the firm, are the fastest-growing category of the three. With a majority of consumers choosing to connect tablets over WiFi rather than cellular networks, tablets were a major driver behind the carriers’ shared data plans.

During AT&T’s July 24 earnings call, CFO John Stephens said that AT&T’s nearly 500,000 net adds during the quarter brought it up to “6.3 million branded computing subscribers, tablets and tethering plans on the network, [which is] up more than 50 percent in the past year.”

The week before, AT&T had introduced its Mobile Share shared data plans, which Stephens said were expected to “drive even more branded computing subscribers onto our network.”