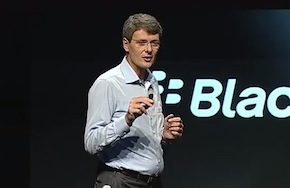 BlackBerry maker Research In Motion will share the results of its fiscal 2013 second-quarter Sept. 27, but first it has some developers to excite. CEO Thorsten Heins kicked off RIM’s BlackBerry Jam Americas developer event Sept. 25 with a keynote that blended an early look at some features of RIM’s upcoming BlackBerry 10 with promises of a strong future ahead, assurances that the wireless carriers are on board, and even a few digs at Apple.

“Don’t worry,” Heins told the crowd to applause, “even with our sleeker, lighter BlackBerry 10 designs, you can actually continue to use your existing standard microSD and HDMI BlackBerry power connectors, so we all can save some money.”

The reference was to the Apple Lightning port on the iPhone 5, which requires anyone with an older Apple accessory to buy a $29 adapter.

What to do with those saved dollars? “Buy some more apps from our BlackBerry developer community,” Heins grinned.

Of course, Heins’ task since becoming CEO in January has been no laughing matter. The company’s revenues and global market share continue to plummet as Apple and Samsung gain dominance—though Heins shared that over the last quarter the company has gained 2 million new subscribers. It has been widely reported that RIM will have to sell off portions of the company or be bought outright. Though neither option is likely before the arrival of the company’s hopeful cure-all—the BlackBerry 10 platform.

“We are laying the ground work for a fundamental change that is not about isolation”—or i-solation, as Heins’ pronunciation suggested, in another swipe at Apple that wasn’t lost on the audience—”but conversation.”

“It’s about engaging with the world around you and not shutting it out,” Heins continued. “We are laying the groundwork for a fundamental change in how people communicate, collaborate and work with each other. BlackBerry 10 is a platform that helps people achieve goals. … We are convinced that BlackBerry 10 will shape the next 10 years as profoundly and positively as BlackBerry shaped the last 10 years.”

Vivek Bhardwaj, head of software at RIM, joined Heins on stage to demonstrate new features of the platform, including the Hub, a single area “where everything is that matters to you,” and Flow, a way of moving between applications and information with the gesture of a single thumb.

Bhardwaj also showed off the ease with which, in BlackBerry Messenger, predicative typing understands that a user is moving between languages. The software learns a user’s habits and grammar and with no provocation understood the language shift and offered appropriate word suggestions in the various languages.

The new BlackBerry 10 phones, said Heins, will also feature fantastic keyboards, a great camera experience and “a killer-fast browser experience” better than one on a desktop.

Before consumers can get excited about BlackBerry’s new smartphones and platform, the wireless carriers need to be, and Heins insisted they are.

Heins added that RIM was holding back a few surprises for launch and promised more news and innovations to come.

“We are fighting!” he told the developers. “Join us.”