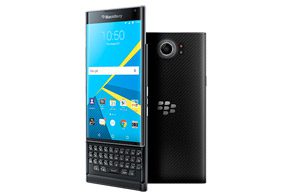 BlackBerry has dropped the price of its Priv smartphone to $649, a $50 cut from its previous price, as it works to increase sales of its Android-powered handset that features both a touch-screen and a slide-out physical QWERTY keyboard.

The company announced the Priv price cut on April 6 as an incentive that also includes discounts of 30 percent on BlackBerry accessories such as headsets, chargers, cases and more, according to the BlackBerry Website.

The company is also offering discounts of 20 percent on BlackBerry Passport or Passport Silver Edition smartphones, which include a wide touch-screen and touch-sensitive keyboards. The Passport is on sale for $399.20, down from its regular price of $499, while the Passport Silver Edition handset is $439.20, down from its regular price of $549. The Priv price cut is permanent while the Passport and accessory sale prices are good only for purchases made through ShopBlackBerry.com through April 12.

BlackBerry announced the Priv in September 2015 in hopes that it would help the company reclaim some hardware market share that it lost to Android phones and Apple’s iPhones.

The Priv, which features a 5.4-inch curved glass display, a 1.8GHz Qualcomm Snapdragon 808 hexa-core processor and 3GB of RAM, includes a slide-out QWERTY keyboard and a touch-screen display. It also includes an 18-megapixel rear-facing camera with a special Schneider-Kreuznach lens and dual flash, a front-facing 5MP camera, 32GB of on-board storage, a microSD slot that accepts cards up to 2TB for expanded storage and a 3,410mAh battery. The handset runs on Android 5.1, and its display is covered with protective Corning Gorilla Glass 4.

A key focus of the Priv smartphone is its inclusion of high-end enterprise security features that have been found in BlackBerry devices for years. Even the name of the phone is an abbreviation of the word “privacy.”

The handset has been built on a new platform, called DTEK, that will warn users if they are being spied upon, according to an earlier eWEEK report. DTEK is a warning system built into an app that will help users determine which apps are accessing their private data. In addition to DTEK, users will find Android for Work integration, sandboxing and embedded crypto keys at every layer to secure the handset.

While BlackBerry has offered access to Android apps through Amazon’s Appstore in BlackBerry 10, the Priv comes will full support for Google’s Play apps marketplace, giving users all of the apps they would expect to find in a mobile marketplace.

BlackBerry, which had stood fast with its own operating system for its products for years, made a huge shift by releasing an Android phone, but was eventually forced to try something new to remain relevant as a smartphone maker.

Earlier in April, BlackBerry reported that its fiscal 2016 fourth-quarter GAAP revenue dropped to $464 million from $660 million a year earlier. For the period, BlackBerry posted a net loss of $238 million, compared with net income of $28 million one year prior.

For the full year ending Feb. 29, 2016, BlackBerry reported GAAP revenue of $2.2 billion, down 35 percent from the $3.34 billion it reported one year ago. The GAAP revenue reflected a purchase accounting write-down of deferred revenue associated with recent acquisitions.

Worse for the company was that its reported fourth-quarter revenue of $464 million was $99 million lower than the $563.1 million expected by a survey of Thomson Reuters financial analysts.

BlackBerry’s business has been changing in the marketplace and its CEO, John Chen, continues to transform the company into a security software company to find new revenue growth as its hardware business continues to shrink.

BlackBerry’s fall from dominating the enterprise smartphone market has been swift and stunning. In early 2006, before the first iPhones appeared from Apple, half of all smartphones sold were BlackBerry models. By 2009, though, its share of the global smartphone market was down to 20 percent. The company continues to face growing competition from Apple, Samsung, Google and others.