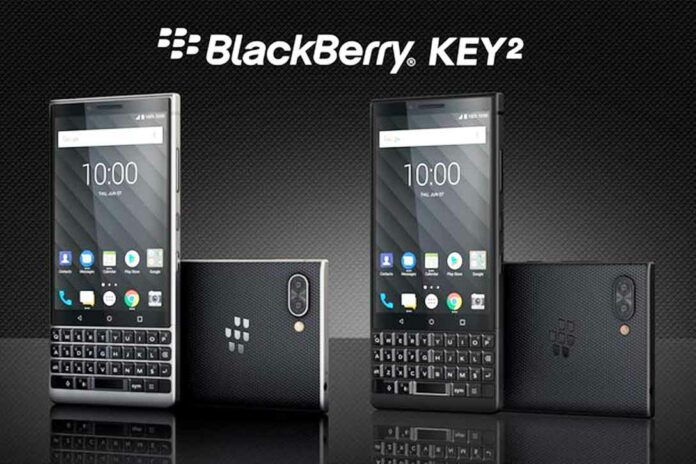 It’s easy to get confused by the BlackBerry Key2. The device says BlackBerry on its chassis but isn’t actually manufactured by BlackBerry. Instead it manufactured under license by TCL, a Chinese electronics company.

However the Key2 looks like the Blackberry handsets of old in one obvious respect—the iconic physical keyboard that have always been a standard feature of these handsets.

Understanding where TCL’s new BlackBerry fits in the broader smartphone marketplace might be the biggest issue for customers to consider. The device is well-built, comes with a nice design and comes with high-quality operating system and application software. But asking today’s smartphone users to keep continue using the physical keyboard design of yesteryear might prove to be the undoing of this latest BlackBerry model.

The BlackBerry Key2’s display is about what you’d expect from other Android devices and looks nice when looking at pictures or surfing the Web. But to accommodate the physical keyboard, the screen isn’t as tall as most others. As a result, some videos and apps look oddly truncated on the screen.

Though, the virtual keyboard works extremely well and nowhere is that more apparent than on the BlackBerry Key2.

Often, whether I was typing an e-mail or simply sending a text message to someone, I found the BlackBerry Key2’s keyboard to be a pain to use. I never realized how much I rely on the auto-correct function baked into virtual keyboards that forgive my occasional typos. The Key2, on the other hand, forces you to be more accurate. It ultimately slowed my typing speed and made for a less desirable typing experience overall.

Still, the BlackBerry Key2’s keys are solid and reliable. Even if my typing skills weren’t up to par, the keys didn’t feel cheap.

Despite its somewhat outdated design, the BlackBerry Key2’s design feels elegant. The BlackBerry Key2 comes with a 4.5-inch display and runs on Android 8.1. The screen is big and bright and the side-mounted power management and volume keys are sturdy and easy to reach.

That commitment to quality and impressive components is something that makes itself apparent each time you pick up the Key2. The device feels hefty and robust in your hand, its buttons are sturdy putting a reliable mobile phone in busy professionals’ hands.

The case’s rear panel has what TCL calls a “diamond grip” that makes it easier to hold and less likely to slip off a table. The rough feeling was a welcome addition.

The BlackBerry Key2 is an effective Android device. The operating system works exceptionally well on the smartphone and flipping between apps is fast and smooth. Although TCL envisions the Key2 as a companion for busy professionals, especially those used to working with BlackBerry’s physical keyboard, its access to millions of apps through the Google Play marketplace makes the Key2 a suitable option for just about anyone who prefers Android handsets.

TCL has integrated a variety of BlackBerry’s own apps in the device, including DTEK, an all-in-one suite of products that aim at keeping data secure. The app was one that I often found myself using to boost my privacy and see what kind of information other apps could access. It’s arguably one of the most useful privacy suites on the Android platform.

Call quality on the Key2 is about average. When I tried calling people in noisy rooms, there was some distortion and they had trouble hearing what I was saying. The same was true when I was on speakerphone. But compared to other devices, like the iPhone X or Samsung’s Galaxy S9, call quality is about the same.

Where the BlackBerry Key2 falls especially short is in its camera quality.

Although it comes with dual horizontally aligned cameras, the cameras deliver grainy and dark photos that won’t pass muster for anyone hoping to capture high-resolution photos. Even in brightly lit environments, like a backyard on a sunny day, important details were lost. Zooming in on a shot would produce smeared images.

TCL promises more than 25 hours of battery life in the BlackBerry Key2 during “mixed use.” And in my testing, which includes placing calls, taking pictures, answering emails and surfing the Web, I hit that mark. Although 25 hours won’t top the smartphone market, it’s a solid showing and one that most business users would find sufficient.

Overall, to appreciate the BlackBerry Key2, it’s important to acknowledge that it’s not a direct competitor to today’s most popular smartphones. The Key2 isn’t as flashy as the Galaxy S9 and doesn’t have the same design appeal as the iPhone X.

But what it does have—and what I came to appreciate in my time with it—is a commitment to productivity. The Key2 design aims to appeal to those who look at their phones as business tools rather than fashion statements. And it generally succeeds at that.

The BlackBerry Key2 is far from perfect and its camera and screen might make it a non-starter for many. But for those seeking a well-designed smartphone that at $650 delivers a great value, the Key2 is a sound choice.