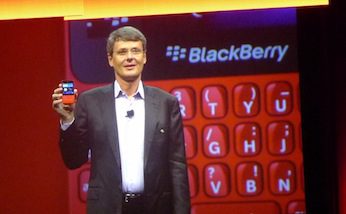 ORLANDO, Fla.—The 2013 BlackBerry Live developer conference, formerly known as BlackBerry World, might be less-than-perfectly summed up in six words: What a difference a year makes.

“It has been an incredible year for BlackBerry,” a somewhat more relaxed-looking CEO Thorsten Heins told the audience. “We have been on a tremendous journey, the last 12 to 14 months … and man, we have reached solid ground with this company.”

Since last year’s show, BlackBerry has launched two phones running its new platform, put together what Heins called “the strongest leadership team in the mobile business,” let go of employees, hired new talent and even posted a profitable quarter.

The organization that last year could only make promises, this year made announcements quicker than journalists could type.

He introduced the Q5, the third device to run BlackBerry 10 and the first to expand its BB10 portfolio into the mid-tier price point. Featuring a 3.1-inch touch display, a QWERTY keyboard and the option of several bright colors (red, pink, black and white), the Q5 will begin shipping to emerging markets—including Latin America, parts of Europe, the Middle East and Africa—in July.

Heins announced the availability of key new BlackBerry 10 apps, including Skype, and shared that the total number of BB10 apps has surpassed 120,000. One-third of developers are now targeting BlackBerry as their primary platform, Heins said, emphasizing, “This is excellent. In 12 months.”

He also announced, “It’s time to bring BlackBerry Messenger to a great audience, no matter what mobile device they carry.”

This summer, BlackBerry’s messaging app will be available to iOS and Android devices. With features like voice, screen sharing and video, Heins said the company is committed to making BBM on other platforms as “fully featured” as possible, and that the decision to offer it to other devices now is a “statement of confidence” in BlackBerry and BB10.

Heins also introduced BBM Channels, a new social engagement platform, currently in beta, for taking BBM “up a notch.” Instead of contacts, it enables BBM users to engage with brands, businesses, celebrities and groups.

Among the newly launching BBM Channels is one for the Mercedes AMG Petronas Formula One Team, which sent driver Lewis Hamilton and his car to join Heins on stage. Hamilton made parallels between the companies, saying each was about speed and making connections.

“Connecting quickly with fans is really important to us, [and now] we can keep them directly involved,” said Hamilton.

During his own Q&A session later, Hamilton spoke candidly and eloquently about his season, his team’s current problems—its tires—and the fact that he had tried out several devices before landing with BlackBerry, which his entire team is now using. While this comment may have been meant to separate him from the mess BlackBerry Creative Director Alicia Keys stepped in, when it was revealed on Twitter that she was using an iPhone, Hamilton shrugged it off as good sense. “It’s like driving lots of different cars … then you can see what needs to be improved [in your own car].”

Hamilton’s car wasn’t the only one to grace the stage. Mark Rigley, director of the QNX concept development team, rolled out in the company’s newest concept car, a Bentley Continental with a “great, big screen” in the center console. Rigley said the screen is curved so that one’s finger can reach the length of it and features “pre-touch” technology, enabling it to react before a user’s finger touches it.

With Heins in the passenger seat, the pair made a smartphone-to-car video call to Vivek Bhardwaj, head of software at BlackBerry, who with some help from a tropical backdrop pretended to be on vacation. (At last year’s event, Bhardjwaj played a huge role in helping Heins balance the sizable burden on his shoulders.)

Rigley made clear that video calls only work when the car is still—if the car begins moving they turn into voice calls—and described the car as one of multiple end points in his network.

“I’ve got this Bentley in my Hub, so it’ll send me a notification when there’s an update,” he said, also showing how quickly the car can update its mapping software, for example.

Last but not least, Alicia Keys was also in attendance to, among other things, introduce a BlackBerry Scholars Program designed to help more women pursue careers in science, technology, engineering and math (STEM). The scholarship will provide full four-year tuition to select women focusing on STEM fields or who “show aptitude in the area of mobile computing.”

Keys cited statistics about how more women than men graduate from college and women embrace mobile technology at a faster pace than men (56 percent of BlackBerry users are also women) but women are paid less in executive positions and only 20 women hold CEO titles in the Fortune 500 companies.

“I’m proud BlackBerry is demonstrating leadership in women’s education, both in the school and in the workplace, and giving back to its most loyal users in such a profound way,” said Keys, who with a panel of accomplished women will choose the first scholarship winners. (The deadline for entries is June 26.)

“If there’s anything I’ve learned in my position so far,” Keys added, “it’s that the right people with the right tools can accomplish anything.”

BlackBerry executives, with their new platform finally working for them, expressed much the same sentiment.

“We have a vision that spans the next 20 years,” said Heins. “I’m thrilled to continue on this journey.”