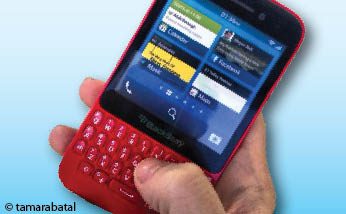 As fans of the BlackBerry QWERTY keyboard begin to get their hands on the slow-to-arrive BlackBerry Q10, images said to be leaked shots of the next BlackBerry 10–running smartphone have emerged, showing another option for the QWERTY crowd.

Photos show all-red or all-black smartphones—said to be called the R10—with BlackBerry logos, a slightly different keyboard from the Q10’s and a longer display.

The rumored specs for the R10, according to TechnoBuffalo, are:

• rear camera (of an unspecified quality)

The specs, which fall below those of the high-end Q10—and sans-QWERTY Z10—are in line with BlackBerry CEO Thorsten Heins’ stated plan to offer three tiers of products: high end, midtier and entry level.

“In order to stay relevant, we have to build a portfolio,” Heins told The Globe and Mail in a March 31 article.

During BlackBerry’s March 28 earnings call, Heins also remarked on the strategy, telling analysts and media, “We’re building a full portfolio. BlackBerry 10, from a technology perspective, is starting in the high end. We will bring it into the midtier by the middle of the fiscal year, and then we are working toward … what we typically call the BlackBerry entry level. So, stay tuned on that one.”

BlackBerry began selling the Q10 in Canada and the U.K. May 1, and while BlackBerry has been quiet about sales, analysts say early response has been strong.

BlackBerry first launched the full-touch-screen Z10, meeting market demand for a consumer-geared phone that could easily strike the work-life balance. While sales of the Z10 have been respectable, even converting once die-hard QWERTY users with its vastly improved touch keyboard, the market has been waiting to see whether QWERTY lovers would return to BlackBerry in droves (that includes current BlackBerry users upgrading old handsets) or move on to iPhones and Android devices.

Selfridges & Co. got an early start, selling the Q10 Friday, April 26. According to Seeking Alpha contributor Michael Collins, there were long lines at 9 a.m. and no phones left by 3 p.m. According to Collins, 2,000 Q10 units were sold in the first 90 minutes—or “22.2 phones per minute.”

Jefferies analyst Peter Misek said in a May 3 note to investors, “Based on our store checks, the BlackBerry Q10 has been selling extremely well and has been sold out or seeing limited availability in Toronto and across the U.K.”

Canaccord Genuity analyst Michael Walkley, in a May 6 note, also reported strong sales, but was doubtful about BlackBerry’s ability to maintain them.

“Our global surveys indicate mixed BlackBerry sell-through trends, with weakening sales of the Z10 over the past month but strong initial demand for the limited supply Q10,” Walkley wrote. “While we anticipate stronger near-term results for BlackBerry as higher margin BB10 smartphones sell into the channel, we do not believe BlackBerry can achieve sell-through market share levels to return to sustained profit levels.”

Following the release of the Z10 in limited markets in February, BlackBerry surprised Wall Street by posting a profit for its fiscal 2013 fourth quarter, which closed March 2.

“To say it was a challenging environment to deliver improved results in could be the understatement of the year,” Heins said during the call.