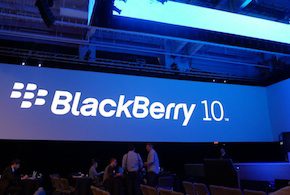 BlackBerry CEO Thorsten Heins spent the months leading up to the BlackBerry 10 launch insisting that the company was not in a “death spiral” but instead righting itself for a comeback.

While some had hope that Heins and his team might indeed produce something that could steady the business, doing so has proven more difficult and more complicated than expected (though BB10 in itself is respected and generally well-reviewed), leaving little room for optimism, or denial, these days.

Heins and his team hired financial advisors in May 2012 to assess the company’s options—though Heins maintained that no decisions would be made until the market’s response to BB10 and its new smartphones was clear. On Aug. 12, 2013, Heins officially conceded that he was open to options: The company put out a statement essentially hanging a for-sale sign on its door.

Now, to make matter worse, “interest is tepid,” Reuters reported Sept. 13, adding that those that are taking a look at BlackBerry are interested in its parts but not the whole thing.

“In recent days, a few private equity firms have signed confidentiality agreements or have agreed to meetings with the company to gain access to the company’s books,” the report added.

Amid such reports, it’s surely difficult for BlackBerry to defend its brand with the vigor it has over the last year or so. And it likewise can’t be easy for the businesses that have invested in BlackBerry to know quite where they stand.

“We certainly have our clients asking us for advice on what steps they should take,” Carolina Milanesi, a Gartner research vice president, told eWEEK. “Our advice has been to look at alternatives and start supporting multiple platforms. Since the announcement of the committee that would look at options for a sale, we have told clients to make a decision sooner rather than later.”

Ken Hyers, a senior analyst with Strategy Analytics, agrees that enterprises are experiencing “huge uncertainly” and, no doubt, “putting contingency plans in place to transition to other platforms.”

“If BlackBerry intends to stem the bleeding,” Hyers told eWEEK, “they need to rapidly find a buyer who will keep the company together and who will be perceived by those enterprise customers as willing to provide long-term support for the platform.”

There’s been talk that Canadian investors could come together to buy up the business and keep it in Canada. And more recently, since the announcement of Microsoft’s plan to buy Nokia’s handset business, talk of Microsoft buying BlackBerry.

It’s been argued that synergies could be created in Microsoft and BlackBerry’s shared focus on the enterprise. And, of course, there’s BlackBerry’s considerable patent holdings.

“While an acquisition by Microsoft might make sense strategically, since the company is focusing largely on BlackBerry’s core corporate clients, it seems unlikely that [Microsoft] would willingly agree to support a non-Windows mobile OS,” said Charles King, principal analyst with Pund-IT.

Gartner’s Milanesi agrees that a buyer is likely to be “more interested in the services side as an integrated cloud offering.”

Hyers said the list of potential buyers could include companies like Lenovo, Huawei, ZTE, Coolpad, TCL-Alcatel, HTC, Nokia, Microsoft, Google, Cisco, Baidu, Tencent and even Nintendo. But each would face various challenges, from cash to security, in staging an acquisition, making the actual number of realistic suitors much smaller.

“I think the best bet is for BlackBerry to sell up to a private equity firm, so it can delist from Wall Street and refocus away from the spotlight on fixing its internal problems,” Hyers continued.

Short of that, he added, Microsoft could offer BlackBerry stability, while benefitting from its patents.

“Overall, the road ahead seems uncertain for BlackBerry customers,” said Pund-IT’s King. “That’s a touchy situation for the hundreds of private and public sector organizations that require employees to use BlackBerry devices.”