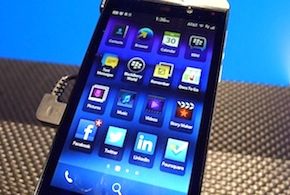 BlackBerry canceled its Sept. 27 earnings call, but still released its dismal fiscal 2014 second-quarter fiscal earnings announcement. The company lost $965 million during the three months that ended Aug. 31 and brought in revenue of $1.6 billion—a free fall of 49 percent from the quarter before and 45 percent from a year ago.

The company sold just 3.7 million BlackBerry smartphones during the quarter, most of them older devices running BlackBerry 7, it said in a statement.

“We are very disappointed with our operational and financial results this quarter and have announced a series of major changes to address the competitive hardware environment and our cost structure,” CEO Thorsten Heins said in a statement.

BlackBerry, after announcing in August that it was open to “strategic alternatives,” including being purchased, signed a letter of intent to sell the company to Fairfax Financial Holdings, its largest shareholder, for $4.7 billion.

BlackBerry is allowed to shop for and accept an alternative option before a due diligence period ends Nov. 4. The New York Times has reported that Fairfax can walk away from the deal without penalty, but BlackBerry will have to pay $157 million to back out.

Other changes at BlackBerry have included employee layoffs. By the end of the year, it’s been said the company could let go of up to 40 percent of its staff.

A BlackBerry spokesperson said the layoffs were part of a “transformation plan,” and that such “organizational moves will continue to occur to ensure we have the right people in the right roles to drive new opportunities.”

Throughout BlackBerry’s downturn, Heins has continued to insist that the company is still financially stable, given its cash reserves and lack of debt.

The company now has a cash and investments balance of $2.6 billion, it reported Sept. 27, and spent $136 million in cash during the quarter.

“We understand how some of the activities we are going through create uncertainty, but we remain a financially strong company,” Heins said in the statement.

He added that BlackBerry remains “focused on targeted markets and [is] committed to completing our transition quickly in order to establish a more focused and efficient company.”

On Sept. 20, offering preliminary results for the quarter, Heins announced in a statement that BlackBerry would stop marketing to consumers and focus on enterprises and professional users—”the customers that helped build BlackBerry into the leading brand today for enterprise security, manageability and reliability.”

While BlackBerry 10 handsets weren’t a success during the second quarter, BlackBerry said that its BlackBerry Enterprise Service 10 (BES 10) offering was.

“While our company goes through the necessary changes to create the best business model for our hardware business, we continue to see confidence from our customers through the increasing penetration of BES 10,” said Heins. “We now have more than 25,000 commercial and test servers installed to date, up from 19,000 in July 2013.”