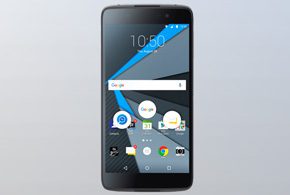 BlackBerry’s latest smartphone, the DTEK50, an ultra-high security touch-screen Android handset that doesn’t include the company’s iconic physical QWERTY keyboard, has made its debut and will go on sale Aug. 8 for $299.

The company said in a July 26 announcement that the DTEK50 is “the world’s most secure Android smartphone.” It is the vendor’s second Android phone, coming after the $649 Priv, which debuted in September 2015.

The DTEK50, which is available for preorder through ShopBlackBerry.com, features a 5.2-inch full HD display with a scratch- and smudge-resistant cover glass, a 64-bit Qualcomm Snapdragon 617 octa-core processor, an Adreno 405 graphics processor, 3GB of memory, 16GB of on-board flash storage, a microSD card slot for additional storage up to 2TB and a user-programmable convenience key.

While all of those features are nice, it’s the security features inside the device that BlackBerry hopes will make it stand out in a crowded smartphone marketplace that has seen the company’s worldwide market share fall to 0.2 percent in 2016 from 11 percent in 2012, according to recent figures from Gartner.

The new DTEK50 includes built-in hardware security features like those in the earlier Priv, including encryption capabilities for all user and business information and data, according to BlackBerry. The handset also includes built-in malware protection as well as data back-up, wipe and restore capabilities. Other included software allows users to control which apps get access to personal information or device features, such as the microphone or camera.

In addition, BlackBerry says it will deliver security patches for DTEK50 users “on the same day that Google publicly releases information about them,” in contrast to many Android phone vendors, which let such updates linger for some time without being issued.

The smartphone lets users manage their security and privacy options and services through a special DTEK app that provides automatic monitoring of the operating system and apps so they know when their privacy could be at risk, according to BlackBerry. The app also provides options for users to improve their privacy and data security on their devices when threats are identified. The DTEK app also tracks applications and notifies users when someone is taking pictures or videos without their knowledge, turning their device microphone on, sending a text message or accessing their contacts or location without permission, according to the company.

The handset also includes a secure multi-step boot process that verifies that each component is fully secure before proceeding, ensuring that the smartphone has not been tampered with since the last restart, according to BlackBerry. The company provides additional operating system hardening to Android on the device, plus uses FIPS 140-2 compliant full-disk encryption for user and business data on the handset.

Also included are Android for Work features for incorporation by enterprise IT departments and users, as well as enterprise mobility management support.

“We take our customers’ privacy seriously,” Ralph Pini, BlackBerry’s chief operating officer and the general manager of the company’s device unit, said in a statement. “That’s why we’re proud to have all the security and privacy functionality that’s built in our newest Android smartphone. DTEK50 merges the unique security and connectivity features BlackBerry is known for with the rich Android ecosystem.”

The new DTEK50 is also available for preorder in Canada, the United Kingdom, France, Germany, Spain, Italy and the Netherlands. In the United States, the handset will be available initially through Best Buy, B&H and Amazon. Preorder customers through ShopBlackBerry.com will for a limited time receive a free BlackBerry Mobile Power Pack, a high-capacity portable charger worth $59.99, to power their devices. The offer is only good through 2:59 a.m. EST on Aug. 8.

Tuong Nguyen, an analyst with Gartner, told eWEEK that while the new phone’s features and price tag appear to be suitable, “the bigger issue is making an impact in such a competitive market with a single hardware offering. Large vendors like Samsung and Apple are already experiencing speed bumps in sales volume.”

Nguyen said that while the new handset’s “high-security features will appeal to a certain subset of the market … [that] the broader market–both consumer and enterprise–[has] many viable alternatives. The price is fine, but I think it’s all the aforementioned issues that will limit traction. I do not think this specific device will give them any headway.”

In April, BlackBerry announced that it would launch two new lower-priced Android smartphone models later in 2016 in an effort to win back customers and increase sales after its flagship, high-end Android Priv phone failed to catch on with buyers as much as the company had hoped. The Priv, which BlackBerry targeted at enterprise customers, might have been priced too high at about $700 when it debuted in September 2015. Earlier in April, BlackBerry dropped the price of the Priv to $649 as it tried to increase sales of the device, which features both a touch-screen and a slide-out physical QWERTY keyboard.

BlackBerry’s fall from dominating the enterprise smartphone market has been swift and stunning. In early 2006, before Apple’s first iPhones appeared, half of all smartphones sold were BlackBerry models. By 2009, though, its share of the global smartphone market was down to 20 percent. The company continues to face growing competition from Apple, Samsung, Google and others.