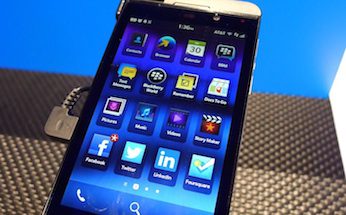 The BlackBerry Z10 will arrive on the AT&T network March 22, Bloomberg reported, citing sources familiar with the matter.

AT&T has not officially announced the date, and declined to offer comment, though “mid-March” has been the time frame that BlackBerry indicated the smartphone would arrive in the United States.

The Z10, BlackBerry’s first smartphone to run the long-awaited BlackBerry 10 platform that the company is betting on to reverse its declining fortunes, has already gone on sale in more than 20 countries. U.S. carriers have a more involved testing period, BlackBerry CEO Thorsten Heins explained Jan. 30, introducing the Z10 during a live-streaming global event, along with a Q10 smartphone slated to arrive several weeks behind the Z10.

Heins gave his company’s stock a lift recently when he told a Spanish newspaper that the Z10 is drawing more interest from rival platforms than the company had expected.

“We are receiving a very positive response to BlackBerry 10 from our customers, but it’s also been attractive for customers from other platforms. We are a little surprised by that,” he said, according to a March 6 report from Bloomberg.

Heins recently had similar news for a German newspaper—that sales of the Z10 have “exceeded expectations” within the company, despite expectations that were “ambitious.”

He added that the response to the Z10 and the BlackBerry 10 platform has been so strong, in fact, that the tone of the company’s ongoing “strategic review”—an assessment by third-party financial advisors regarding whether a sale of the company or certain of its assets is necessary—has changed. BlackBerry’s options and future, “could perhaps go in a different direction,” Heins said.

The Z10 features a 4.2-inch touch-screen—the Q10 will instead pair a 3.1-inch display with a QWERTY keyboard—and features several characteristics that make it very unlike competing devices. Key among these is the Hub, a single place to view a user’s most recent interactions, whether emails, calls, text messages or Twitter or Facebook notices, and what BlackBerry calls Flow—a way of moving around the device, and immediately between applications, that doesn’t require a user to return continuously to a home screen.

While a QWERTY keyboard is what many longtime BlackBerry users desire, the Z10 features a fast, intelligent on-screen keyboard that may make converts of the QWERTY faithful. It quickly learns not only the words and phrases that its owner uses—and so presents them before they’re typed—but the way that person is inclined to touch the keys, ultimately making for fewer typos.

“I did not believe it was humanly possible to become more engaged with a smartphone than I already was—and certainly neither did my wife,” grinned BlackBerry’s Piasentin, a dedicated QWERTY user who said he also keeps working versions of iOS and Android phones to feel aware of what BlackBerry’s competitors are doing.

“With the Z10, I find myself abandoning other consumption tools. I’m not using tablets much anymore—I don’t even travel with my laptop anymore. … While the Q10 is great, I wouldn’t go back to a QWERTY now—I wouldn’t sacrifice the screen real estate. There’s no need to.”

Neither Verizon nor T-Mobile has commented on specifically when they will release the Z10, beyond a late-March time frame. Sprint plans only to carry the Q10 later this year.

On Feb. 11, contract-free carrier Solavei announced that it had begun offering the Z10 through handset partner GSM Nation for $999. The site currently lists the Z10 at a reduced $709, but says it’s currently back-ordered.