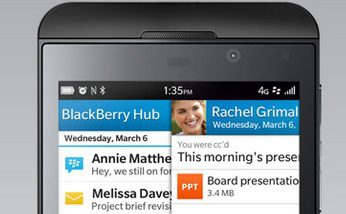 The BlackBerry Z10 is the first smartphone to run BlackBerry 10, the mobile operating system that BlackBerry is counting on to make it, once again, a top-selling brand.

The Z10, with its button-free facade, is dominated by a 4.2-inch touch-screen that’s more pixel-rich than the Apple iPhone’s Retina display. And while it won’t win any prizes on the scale, it’s as thin as the iPhone 5, though at a glance you wouldn’t think it.

The Z10, really, isn’t much to look at—it’s fine-looking. What’s fantastic is the software.

BlackBerry gave a handset to everyone in the audience of its Jan. 30 New York City event, though without SIM cards, which are said to be following in the mail; the phone won’t go on sale in the United States until at least mid-March. After spending even an hour with the Z10, all that CEO Thorsten Heins promised during the 12 months between taking the CEO position and introducing BB10 becomes more understandable.

He promised an end to the old user paradigm, and the way one navigates the Z10 and accesses information is certainly something new. It’s as though other mainstream operating systems are essentially the same style of house with very different furnishings, but BB10 has an entirely different layout—a layout that challenges what we imagined to be the architectural options of a house.

Heins also said that BB10 was designed neither for business users nor consumers but for what’s thought of in-house as “the BlackBerry people”—people who have a lot going on and want to do it all and do it well, whether that means managing an acquisition or a Little League team.

If you want to play Angry Birds for an hour, go for it. It’s in the BlackBerry World app store (though some will complain that with only 70,000 apps, too many other apps are still missing). But if what you really want to do is get in and get out—make sure you have all the information you need, and that you aren’t missing anything—that’s where BlackBerry 10 excels.

Heins and company have been talking endlessly about Peek and Hub and Flow. Again, I get it.

The Hub is a central place where, at a glance, a user can see all her latest correspondences, from text messages to calls and email to new Facebook and Twitter updates. The way mobile users are accustomed to seeing emails in an inbox, the Hub, using icons for clarity, lines up all of one’s latest information.

Alternately, within the Hub, with a tap, one can choose to instead see all of one type of information delineated—just new Tweets, or just email, for example.

BlackBerry 10 also allows many applications to be open at once, which is not only convenient but a great time saver. Until you close them, they’re open and updating. The browser is also very fast, even on content-dense sites like The New York Times.

BlackBerry Z10 Smartphone Is, as Promised, a New Paradigm

Information feels very accessible, from wherever you are in the OS—which is the benefit of Flow, or the way one moves between the screens. From anywhere a user can swipe halfway up the screen with a thumb and see icons pop up on the left depicting new information: seven new emails and 18 Facebook updates, for example. Keep that thumb pressed and move it to the right and one can Peek into the Hub (or one of its delineations) for a more involved update—such as to see exactly who the new emails are from.

However, even before taking either one of those actions—swiping up or over—a flashing light at the top of the phone alerts a user to something new. If you’re watching a video and waiting for a text, you don’t have to keep checking, the light will let you know when something arrives. When the light flashes, you can Peek over—the video won’t stop, unless you see that it’s the information you’re waiting for and you swipe the screen all the way aside and lift your thumb.

Using the Z10 over a few days, there was a learning process. I had the feeling I’ve had after moving to new cities—the awkwardness of not quite knowing my way, while having no doubts that I soon would and when I did it would be great.

Navigating BB10 feels efficient, and when efficient is something you need to be, using the Z10 is very satisfying.

That is not to say it’s perfect.

The app store is said to have the top 1,000 apps—which some analysts say is what’s most important; no one really needs 700,000 apps. But what that likely means is many regional and local apps are still missing. I generally use far fewer apps than the average person, but the few I did go looking for—the New York-friendly Seamless and HopStop—weren’t there. Neither was Roadify—the great iPhone app that also isn’t available for Android.

(That said, as much as I don’t use apps often, with the Z10, I used them far more frequently. BB10 just makes it more convenient to, and to quickly move between them.)

The Z10 also has a terrible accelerometer. Often I’d turn the phone from portrait to landscape mode but the phone wouldn’t realize it, or it would realize it only after a several-second delay.

The camera also isn’t great. The rear camera takes excellent, 1080p high-definition (HD) video, but in low-light conditions, the camera behaves in a way that Apple and others began addressing a generation of devices ago. BlackBerry will need to catch up.

The same goes for its overall hardware. While it’s refreshing that BlackBerry 10 is so compelling that the general conversation about the Z10 has been more on software than hardware, the fact is that people like a great-looking phone. They want a phone that impresses when they set it on the table.

BlackBerry, to again be a winning brand, needs to stand toe-to-toe with everything Apple and Samsung can dream up. This means that the next BlackBerry 10 devices are going to need to be as impressive in appearance as the Z10 is in experience.