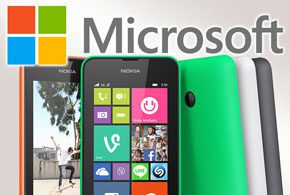 Microsoft officially launched the Lumia 650 phone in select European markets, the company announced on Feb. 15. Though the Windows 10-powered smartphone retails for about $199, the company made an effort to bring some premium features to the low-end device, according to Microsoft Program Manager and Devices Lead Samuli Hänninen.

The Lumia 650 was designed “to bring first class to business class,” said Hänninen in a Feb. 15 announcement. Examples include a 5-inch OLED screen, the display technology often found in high-end devices like Samsung’s popular Galaxy smartphones. An exposed metal chassis, another relative rarity among budget phones, further helps set the handset apart in its price range.

“Lumia 650 also features a highly polished, diamond cut and anodized aluminum frame, giving it an unparalleled and premium feel,” he added. Microsoft is also bucking the trend of releasing sealed handsets with non-user replaceable parts. “Importantly, we didn’t sacrifice the removable battery and expandable storage, something we know our customers enjoy having.”

The device is easy to slip into a suit pocket or gadget bag. “And with a profile of only 6.9mm and weighing just 122 grams, it’s incredibly thin and light,” noted Hänninen. Video and photo imaging duties are handled by a 5-megapixel front camera and 8-megapixel rear shooter.

While built to appeal to design-conscious smartphone buyers, the Lumia 650 is squarely aimed at businesses seeking to harmonize their efforts at embracing mobile productivity with their Windows-based user IT environments.

“Lumia 650 runs the latest Microsoft Office apps right out of the box, allowing you to create and edit documents on-the-go and sync them to the cloud via OneDrive,” Hänninen said. “It’s also perfect for picking up on email and an important presentation during your commute.” Of course, Microsoft’s virtual assistant is also along for the ride. “And with Cortana, your very own personal assistant, you’re always organized and prepared for the day ahead,” he added.

The phone supports a growing number of Universal Windows Applications, “code-once” software that works across a variety of Windows 10 devices, from tablets and PCs to smartphones. “It also allows IT to test the latest Windows 10 Mobile updates against critical line of business systems and apps, before you distribute to end users via MDM [mobile device management],” remarked Hänninen of the 650’s enterprise-friendly capabilities.

In addition, Lumia 650 smartphones tackle a growing concern among IT administrators: mobile security, or rather, the lack thereof.

“It’s secure by design and keeps company and personal data safer with features like device encryption and device wipe. These features allow businesses peace of mind, knowing important information in emails and files are protected from threats and empowers employees to use one device for work and play,” stated Hänninen.

The 650 may be among the last smartphones from Microsoft to carry the Lumia branding, which the company inherited as part of the massive $7 billion acquisition of Nokia’s hardware and services units. In December, remarks by Microsoft Chief Marketing Officer Chris Capossela stoked rumors of an upcoming Surface Phone that borrows its name from the company’s successful tablet line.