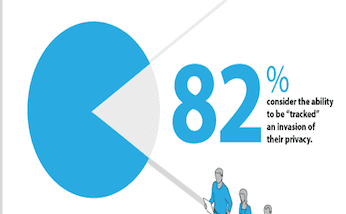 Some corporate bring-your-own-device (BYOD) policies leave a majority of users feeling uncomfortable if not violated, according to a recent Harris survey commissioned by Fiberlink.

BYOD policies enable employees to use their devices of choice and save employers from the costs of hardware purchases. Indeed, the rise of personal device ownership alongside belt-tightening measures has encouraged a flourishing BYOD market—by the end of this year, 65 percent of companies expect to have some type of BYOD policy in place, according to a May Arc Chart report, and only 11 percent of companies don’t have any BYOD plan for the near future.

But as the Harris study suggests, there’s a need for CIOs to choose solutions with care.

In instances where mobile-device-management (MDM) software offers employers location information about employees, 82 percent of respondents in the Harris survey described the ability to be “tracked” as “an invasion of their privacy.”

Business users are also concerned about whether their employers are viewing the private information on their personal devices; 82 percent said they are “concerned to extremely concerned” about employers looking at the Websites they visited during nonworking hours, and 86 percent said they were concerned about “the unauthorized deletion of their personal pictures, music and email profiles.”

Another 76 percent said they wouldn’t give an employer access to view the personal applications installed on their devices.

Given workers’ concerns, Fiberlink President Christopher Clark said in a Sept. 27 statement, “Organizations need to be just as concerned about user privacy as they are about the security of corporate data.”

Clark added that MDM solutions can resolve this by using Privacy Settings to prevent the collection of employee data, but that “these measures are rarely put in place.”

Certainly, a number of companies offer solutions equipped with such capabilities.

BlackBerry maker Research In Motion has been busy promoting a BlackBerry Balance feature in its upcoming BlackBerry 10 platform that enables IT staff to push and pull corporate information to a device but to have zero view of any of a user’s personal information.

RIM CEO Thorsten Heins has described it as solving a major “pain point” for CIOs.

Hardware makers such as Nokia have also tackled the issue, with smartphones that have personal and work personas a user can toggle between. Even the carriers are getting involved in the growing BYOD market. At an AT&T Labs event in April that showcased the work being tackled and tinkered with by AT&T innovators, a solution for Android devices created a virtual wall on the smartphone or tablet. Through a cloud-based Web portal, an administrator could control the corporate information but have no view of the user data, photos, email and whatnot on the other side of the wall.

As essential as having an appropriate and secure solution in place is the need to educate employees about the solution, the survey added.

“Achtung!” warned a blog post linked to an infographic on the Harris findings. “Your end-users have grave misperceptions about [BYOD].” Educate them, lest they fear “that BYOD would transform IT from a helpful business partner into an Orwellian Big Brother keeping round-the-clock tabs on all device activity.”