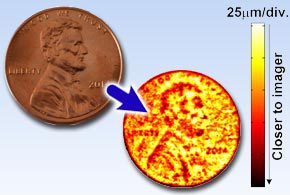 A tiny high-resolution 3D scanner could one day be built into a smartphone, enabling users to easily scan an object in 3D and then print it out on a 3D printer. A few years ago that could have been the stuff of science fiction, but today it is a project being worked on and developed by researchers at the California Institute of Technology.

The research is being conducted on a new device called a nanophotonic coherent imager (NCI), which is being built onto a tiny and inexpensive silicon chip less than a millimeter square in size to produce incredibly accurate replicas of objects on 3D printers, according to an April 3 story on Caltech’s Website.

Such a device could be useful because today typical 3D scans have to be made on costly and bulky scanners so that objects can be accurately replicated for eventual 3D printing. By miniaturizing the scanner, it could bring the process to a wider group of users who could find new and innovative ways to take advantage of the technology.

The development work, which is described in the February 2015 issue of Optics Express, is being headed by Professor Ali Hajimiri, who teaches in Caltech’s school of electrical engineering.

A 3D imager, or scanner, is needed to produce a high-resolution scan of an object so that all of its measurements can be captured accurately for reproduction by a 3D printer (see photo of a penny captured by the imager).

“In a regular camera, each pixel represents the intensity of the light received from a specific point in the image, which could be near or far from the camera—meaning that the pixels provide no information about the relative distance of the object from the camera,” the story reported. “In contrast, each pixel in an image created by the Caltech team’s NCI provides both the distance and intensity information.

“Each pixel on the chip is an independent interferometer—an instrument that uses the interference of light waves to make precise measurements—which detects the phase and frequency of the signal in addition to the intensity,” Hajimiri said in the story.

The chip being developed by the Caltech team uses the detection and ranging technology known as LIDAR, which illuminates and scans a target object using laser beams, according to the report. “The light that reflects off of the object is then analyzed based on the wavelength of the laser light used, and the LIDAR can gather information about the object’s size and its distance from the laser to create an image of its surroundings.”

An array of tiny LIDARs on the Caltech imager allows different parts of an object to be simultaneously scanned without any mechanical movements within the imager, the story reported.

Also contributing to the research are Firooz Aflatouni, a former postdoctoral scholar and current assistant professor at the University of Pennsylvania; graduate student Behrooz Abiri; and Angad Rekhi. The project was partially funded by the Caltech Innovation Initiative.

“The small size and high quality of this new chip-based imager will result in significant cost reductions, which will enable thousands of new uses for such systems by incorporating them into personal devices such as smartphones,” Hajimiri said.

Research using 3D printers and technologies continues around the world, and even in space. In December, astronauts used a 3D printer on the International Space Station recently to print a usable tool after a data file was uploaded from Earth that gave the printer the specifications and directions for how to produce the tool, according to an earlier eWEEK report. The astronauts created a working ratchet wrench using the printer, which manufactured the tool in the weightlessness of space as yet another test to see how such processes work in space.

In November, the 3D printer on the ISS produced the first part ever created in space using the technology when it manufactured a faceplate that could be used on the printer itself, according to an earlier eWEEK report. That feat was a milestone because it proved that 3D printing is viable in space, adding flexibility for future missions that might require spare parts that no one had bothered to bring from Earth.